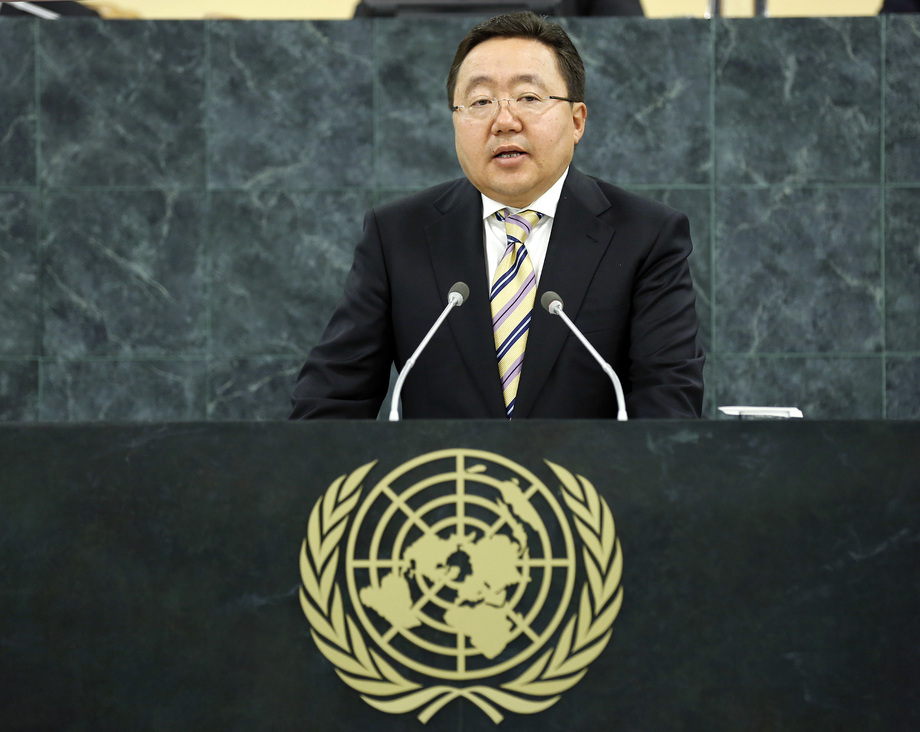 ELBEGDORJ TSAKHIA, President of Mongolia, noted that progress had been made since the adoption of the Millennium Development Goals, as globally more than 70 million people joined the middle class each year. However, despite this achievement, 200 million people remain jobless; 50 million children do not attend school and one in eight persons goes hungry. Climate-wise, he said, the environment was changing rapidly and global consumption far exceeded the planet’s capacity, resources were exhausted and mankind endangered. Defining the country as “an old nation with a young heart”, he highlighted that Mongolia was one of the world’s fastest developing countries, which was able to achieve universal primary education, reduce child mortality, and improve maternal health. To achieve the remaining unmet Millennium Development Goals, national stakeholders, the private sector, research institutions, civil society and media were working cooperatively. On the issue of the environment, he said that the country had promoted a green development policy, creating and preserving national parks to curb desertification, as well as exploring the potential of renewable energy. In light of the many environmental challenges, such as land degradation, deforestation, natural disaster and pollution, Mongolian people, especially its youth, were fully committed to building a better environmental future. Turning to the issue of corruption, he stated that Mongolia had a zero-tolerance policy at all levels of Government, which had resulted in the country advancing 26 places in the Transparency International ranking of Member States. Convinced of transparency being key in the fight against corruption, he pointed out the country’s “glass account” system, which ensured that all funds were accounted for openly and transparently. He noted that, as the country held the chair of the Community of Democracy, Mongolia placed great importance on democratic development. Promoting freedom and democracy, as well as fostering civic engagement would strengthen democratic institutions and improve human rights, because “knowledge is power”, he said. The move for greater democracy was pursued nationally and regionally, as displayed by the country’s efforts to share the lessons of parliamentary democracy and legal reforms with Kyrgyzstan, as well as other initiatives, including providing trainings for diplomats and public servants from Afghanistan. He concluded by asking Member States to support Mongolia’s 2015 candidacy to the United Nations Human Rights Council. On Syria, he said that people were distressed by the endless cycle of conflict, military force, weapons and loss of life. In this regard, he said that Mongolia would not tolerate the use of chemical weapons and strongly condemned the violation of the universally accepted international law. As a country with internationally recognized nuclear-weapon-free zone status, and uniquely situated between two nuclear weapon States, also permanent members of the Security Council, Mongolia had been working hard on disarmament and non-proliferation issues. “This is Mongolia’s contribution to greater confidence and non-proliferation in the region,” he said. He concluded by highlighting Mongolia’s commitment to peacekeeping through the deployment of military officers and troops to maintaining international peace and security.