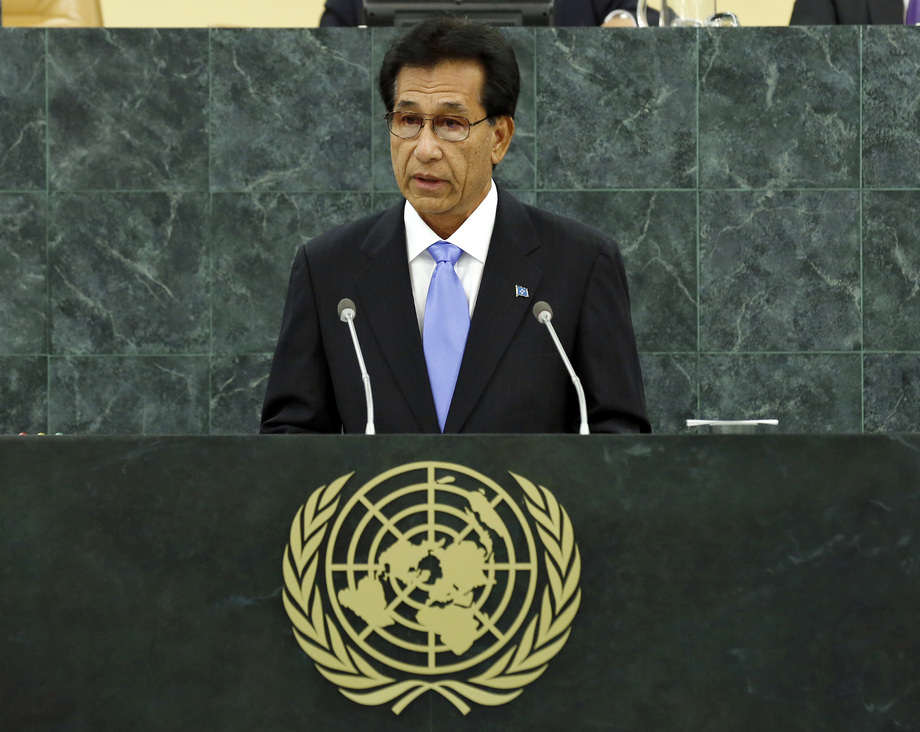 EMANUEL MORI, President of the Federated States of Micronesia, said that since the 1992 Rio Earth Summit, production and consumption patterns had become increasingly unsustainable, driven primarily by a desire to “develop economies at any cost”. As such, he stated that a post-2015 development agenda must move beyond addressing basic human needs and focus on sustainable development, which should be carried out in a dynamic and inclusive manner. International cooperation and assistance were crucial to advancing those goals and development and the environment were inseparable, he added. While societies strived for economic progress, he said that the natural environment had come under attack, with climate change the gravest threat to his peoples’ welfare.

“It is the survival issue of our time”, he said, stressing that the climate change treaty to be adopted in 2015 must impose legally binding commitments that reflected a level of ambition “far higher” than that under the second Kyoto Protocol period. He also called for the creation of a Sustainable Development Goal on healthy, productive oceans, as well as for sustainable energy to be included in those Goals, which were under discussion in New York. On national initiatives, he said his country had an integrated disaster risk management and climate change policy that mainstreamed climate change into its primary governmental and economic decision-making processes.

Further, the Federated States of Micronesia had taken “significant” steps in conserving its limited land and fragile marine eco-systems through the “Micronesia Challenge”, he said, having also recently adopted a national energy policy that aimed to ensure a sustainable energy supply. To continue that progress, he called on donors to honour their pledges to allocate 0.7 per cent of their Gross National Income (GNI) to Official Development Assistance (ODA). Turning to sustainable development, he said his Government was tailoring an approach that was inclusive of the situation of women, youth, the elderly and disabled. He noted that their advancement must be mainstreamed into discussions on the post-2015 agenda.

On other matters, he urged addressing non-communicable diseases through the sustainable development goals, and expressed support for the outcome document from the high-level meeting on disability and development. He said that his country was striving to protect its people from human trafficking and supported the United Nations efforts to stop that malice. The global development agenda, he said, would be shaped by the launch of the sustainable development goals and the new High-level Political Forum on Sustainable Development would be crucial in monitoring commitments made in Barbados, Mauritius and Rio. He commended the Secretary-General’s advocacy of the High-level Summit on Climate Change next year.

In closing, he appealed to United Nations agencies for urgent assistance in the area of reliable data collection. He stated that he had been horrified by the killing of innocents in Syria and elsewhere, especially women and children. “We, in our peaceful islands, condemn violence,” he said, stressing that today’s world was too interdependent for any nation to stand aside while generations of internal conflicts hardened into unending hatred and bloodshed. “We are all stakeholders,” he said. He called on the United Nations to employ its collective will to pursue the ideals of its Charter and noted that the goal was achievable.