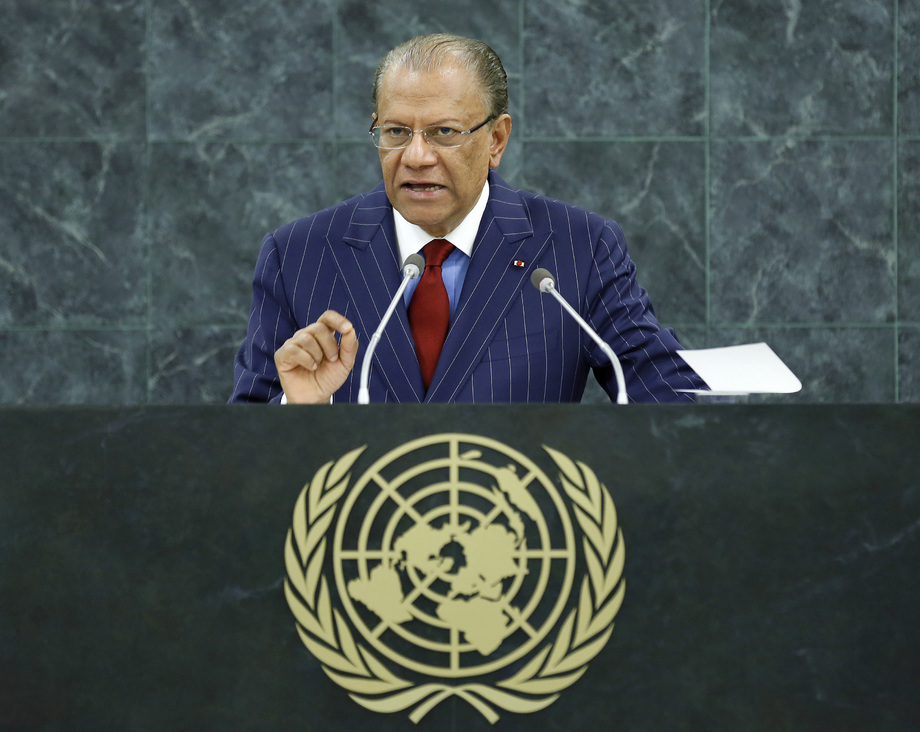 NAVINCHANDRA RAMGOOLAM, Prime Minister of Mauritius, strongly condemned the terrorist attack in Kenya, which he said should compel us to revisit the regional and global responses to national and international security. On the post-2015 development agenda, he welcomed the concept that it be guided by the vision of eradiating extreme poverty in the context of sustainable development. “Climate change should be one of the top priorities on the global agenda,” he said. Responsible for global warming, humans were putting life on earth in jeopardy, he said. No country was safe from natural hazards and from the damaging effects of climate change, particularly for small island developing States as the foreseeable consequences threatened them even more dramatically in terms of human and economic development. He called for a global, legally binding agreement on climate change by 2015.

On the issue of disaster risk reduction, he said the time had come to address disaster risk and climate change adaptation through an integrated approach and to adopt “resilience” as a common and shared vision. In light of the upcoming Third International Conference on Small Island Developing States in 2014, he welcomed opportunities to discuss the concept of “global concerns”; issues which should be the concern of the global community at large and not only of those who were more vulnerable and more at risk.

On the global economy, he said that given we were an interconnected and interdependent world, not a single nation was immune from external shocks. Small States, however, were particularly susceptible as they were heavily dependent on foreign markets for trade, tourism and investment. Mauritius therefore encouraged the post-2105 development agenda to include a road map for an interconnected world economic system, premised on the assumption that the global economy would be “as weak as its weakest links”. He said universal targets of all nations should be eradicating extreme poverty, empowering women, providing wider job and educational opportunities to young people, improving health care and better managing energy, water and food resources. “The conventional divides of the past are no longer valid,” he said, adding that existing global economic governance mechanisms must be revisited.

Turning to the issue of the world’s oceans, he welcomed the jurisprudence of the International Court of Justice and of the International Tribunal for the Law of the Sea, which fostered the settlement of maritime disputes and promotion of international peace, security and equity. He then called on the United Nations to formulate a global vision for the oceans, which would expand economic space for small island developing States whilst ensuring sustainable use of living and non-living resources. “The health of our economies will depend on the health of our oceans,” he said, adding that “as the world realizes the tremendous potential of marine renewable energies, we will see the oceans from a different perspective.”

Cognizant that the rule of law and therefore open and participative democracy, accountability and transparency were concepts to be promoted at the national and international levels, he urged for the reform of the Security Council, whose membership should be extended to Member States from Africa, Latin America, small island developing States and India. Stating that rule of law should prevail in the resolution of disputes, in accordance with the United Nations Charter, he noted that the dismemberment of part of his country’s territory, the Chaos archipelago, by the United Kingdom was in “clear breach of international law. He added that it “left the process of decolonization not only in Mauritius, but in Africa, incomplete”. He went on to welcome the rise of a “re-energized Africa”, as exemplified in the return to normalcy in Mali, and hoped for more regional cooperation. Moving to the situation in the Middle East, he condemned the use of chemical weapons in Syria, welcomed the possibility of the peaceful coexistence of the States of Palestine and Israel, and underlined his country’s support to a peaceful restoration of democracy in Egypt.