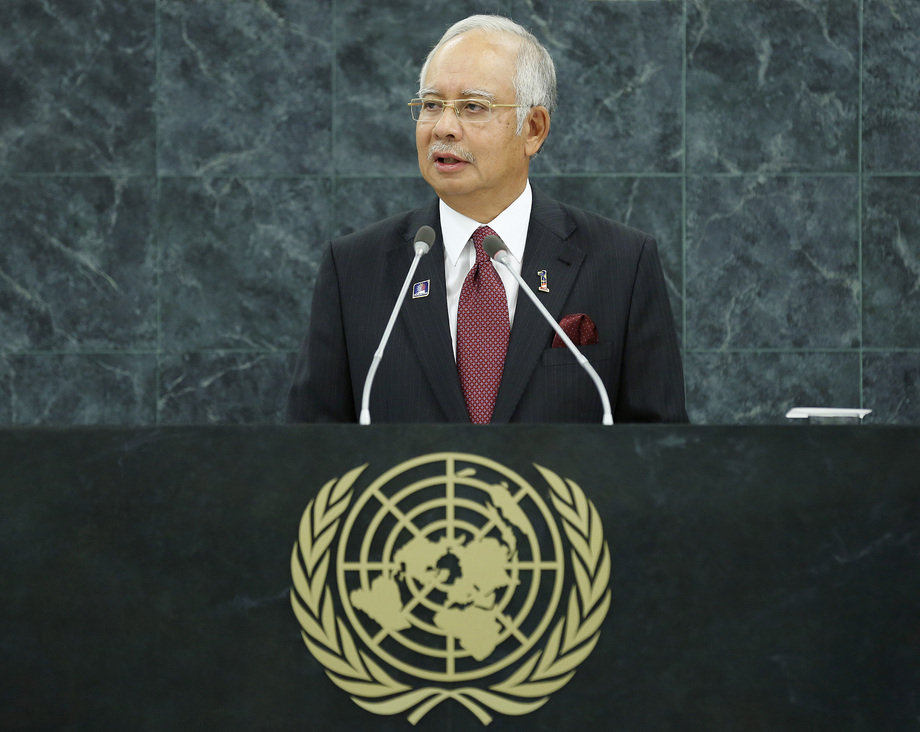 MOHD NAJIB BIN TUN HAJI ABDUL RAZAK, Prime Minister of Malaysia, recalled that in 2010, he had proposed the “Global Movement of Moderates” to reject extremism. The real divide was not between East and West, developed and developing worlds, or Muslims, Christians and Jews, but between moderates and extremists. Since 2010, the Arab Spring had caused much change, he noted. “The greatest threat to Muslims today comes not from the outside world, but from within,” he said, pointing out that the conflict between Sunni and Shia threatened the lives and livelihoods of millions of Muslims. Islam, founded on peace and premised on tolerance, was being twisted by extremists who deployed false arguments to foster division and justify violence. But the world was not powerless to act, he emphasized. “By reaffirming our commitment to moderation — and solving the political problems that drive instability — we can seize back the centre ground. We can marginalize the extremists. And we can advance the agenda for peace, harmony and justice.” World attention was rightly focused on Syria, he said, noting that a conflict that had begun with anti-Government protests threatened to descend into a war of ethnic cleansing. With fighters from Hizbullah engaging on Syrian soil, the conflict now menaced Lebanon too. Communities were dividing along religious lines, with hard-line preachers urging violence between Sunni and Shia. Meanwhile, Iraq’s security situation continued to unravel as Sunni extremist groups and Shia militia struggled for control, he said, adding that almost 3,000 people had been killed in the last four months. In Pakistan, bombings had wrecked the city of Quetta, killing hundreds, he continued. In August, militants had ambushed buses, dividing the passengers according to creed; those answering incorrectly had been executed. Emboldened by political failures, radical preachers and militant groups were turning civil conflicts into wider religious wars, he said, stressing, however, that there was no scriptural basis for the atrocities being committed in Islam’s name. Noting that the extremists would not stop even for Ramadan, he said more than 4,400 people had died in Syria during the holy month, 371 in Iraq and 120 in Pakistan. It was time to end the killing and focus on building a common agenda for peace and prosperity, he said. “Our task is to reclaim our faith and stand firm against the minority who use Islam to further violent and unjust means,” he emphasized. “We should not mistake moderation for weakness.” Moderation could be practised nationally, as in Malaysia, and by fostering mutual respect and stronger bonds between different communities and faiths. All countries should reinforce their commitment to moderation in religion, sustainable development and stable economic growth. Moderation could also direct regional policy. It was at the heart of Malaysia’s efforts to bring peace to the southern Philippines and to Thailand’s restive south. Moderation could guide global approaches to global challenges, helping to resolve political problems that had raised tension in the Muslim world, starting with Syria, he said. He went on to underline his country’s opposition to unilateral action to resolve the conflict, and welcomed the framework agreement between the United States and the Russian Federation. Condemning the use of chemical weapons, he called on the global community to bolster efforts for a diplomatic solution under United Nations auspices. It was also vital to find the vision and political will to commit to a just solution for Palestine, he said, expressing hope for progress towards a viable Palestinian State based on the pre-1967 borders and with East Jerusalem as its capital. The Arab Spring had shown that the Muslim world was crying out for change. Governments must answer that call, he added, stressing that they must provide good governance to fight corruption, create jobs to tackle poverty and deliver sustainable growth. “We must create economies in which people can fulfil their own aspirations, not those of extremists,” he said.