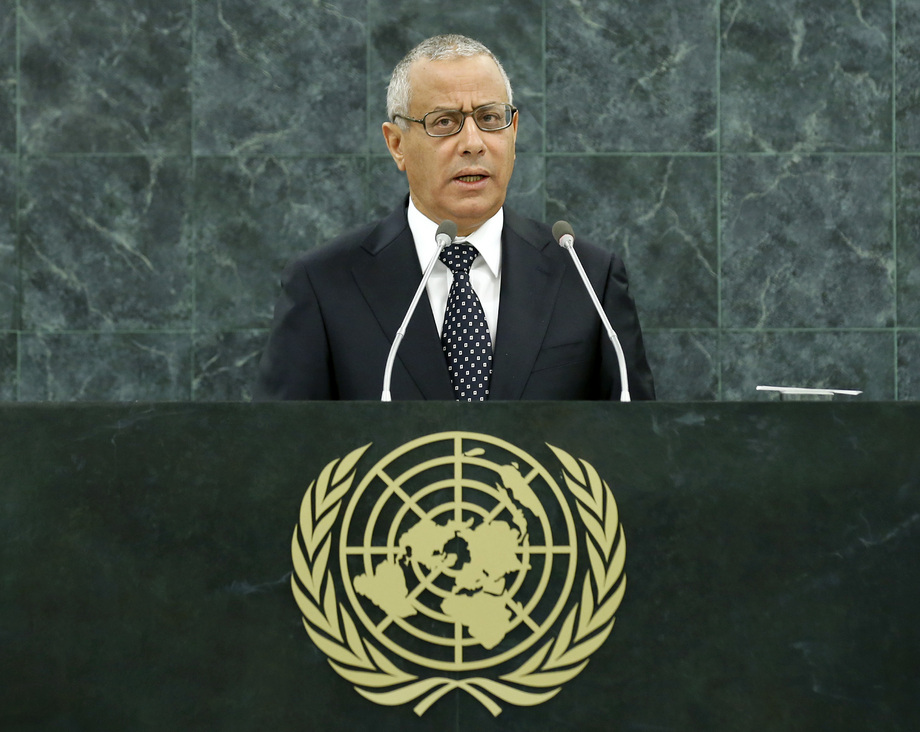 ALI ZEIDAN, Prime Minister of Libya, said his country was forging ahead towards democracy, good governance and the rule of law in an effort to construct a free and modern democratic State. Enumerating the steps taken in recent years, despite the enormity of the challenges and the heavy legacy left by the former regime, he reassured the international community of Libya’s abiding commitment to the rule of law, respect for human rights, fundamental freedoms, peaceful transfer of power, and international cooperation. Recalling the support Libya had received from the United Nations from its very independence, he said the United Nations Support Mission in Libya was performing a “distinguished effort” in national renewal.

Urging the countries concerned to surrender elements of the former Libyan regime in their territory, he requested the international community to fully lift the ban on arms so that Libya could bolster its security. He also urged the Security Council and countries concerned to ensure the repatriation of Libyan assets frozen in other countries.

Stressing that Libya faced many problems from illegal immigration on the humanitarian, health, security and economic fronts, he called for a concerted regional and international effort to find an urgent solution, taking into consideration respect for State sovereignty and the dignity and rights of migrants. Emphasizing the threats smuggling of narcotics and arms posed, he underlined the importance of bilateral and multilateral support to national efforts and highlighted Libya’s efforts to promote such cooperation. As Libya resumed development activities, he stated it had become imperative to work expeditiously to recover money looted from Libya’s treasury and sent abroad. He also requested the countries concerned to safeguard the investments Libyans had made abroad.

Reiterating his commitment to human rights issues, he said Libya was working on amending or repealing legislation inconsistent with its international obligations; ensuring constitutional scrutiny of laws; and ratifying international conventions on persons with disabilities, on the prohibition of torture, and on enforced disappearance. The Government was also devising a practical mechanism to build cooperation with the United Nations High Commissioner for Human Rights and follow-up on the state of human rights in Libya.

Turning to weapons of mass destruction, he pledged a “serious contribution” to their elimination and called for a legally binding instrument to ensure the security of non-nuclear States from the threat or use of nuclear weapons. Supporting initiatives to convene an Arab League conference on declaring the Middle East a zone free of weapons of mass destruction, he also encouraged efforts to complete a comprehensive United Nations convention on terrorism.

Citing the difficulties many African States faced in achieving the Millennium Development Goals, he called for greater economic assistance, advice and technical support from the developed world. The post-2015 agenda should build on the successes in the implementation of the Goals and the reaffirmation of the principles and findings of international summits to embody a true international partnership for development.

On the issue of reforming the United Nations, he stressed Africa’s equitable representation in the Security Council in the permanent and non-permanent categories in order to make the Organization more democratic and efficient. He urged the international community to end the tragedy of the Palestinian people through a comprehensive solution that would establish the State of Palestine with Al Quds as its capital and guarantee refugees the right to return. On Syria, he urged the Security Council to act in accordance with the concept of the “right to protect”, and called on the international community to put an end to the human tragedy experienced by the Muslim Rohingya minority in Myanmar.

The representative of Libya, speaking in exercise of the right of reply, responded to the President of Bolivia, asking who had been in control of Libyan oil under the Qadhafi regime and who owned it today.  Under Qadhafi, the oil had belonged to him and his family, and the proceeds were distributed to members of an “international anti-imperialist forum” President [Evo] Morales [Ayma] was familiar with, being a leading member, he said, adding that the Bolivian leader’s comments had been motivated by the loss of an excellent source of financing.  Now, the oil and its revenues were in the hands of the Libyan people, repairing what Qadhafi had destroyed by building infrastructure and providing basic services to citizens.  Libya had not been attacked, but the tyrant Qadhafi had been killed for indiscriminately killing Libyan civilians.  It was sad that President Morales could not acknowledge the atrocities committed, he added.

The following statement (PDF in Arabic) was made by the Representative of Libya exercising his right of reply.

The representative of Libya stressed that he had never lied in his entire life, and that anyone wishing to see his documents could do so.