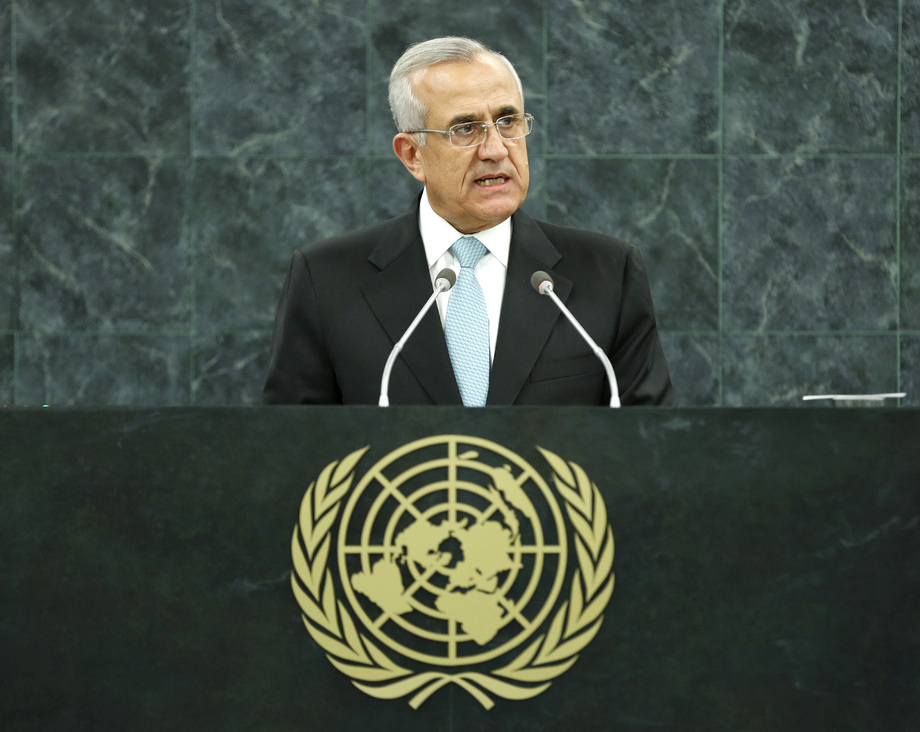 MICHEL SLEIMAN, President of Lebanon, said that many countries had witnessed uprisings, civil wars and external aggression, but had nevertheless managed to overcome difficulties and constitute their national edifice. Lebanon, he said, had also experienced such wars, resulting in inflows of refugees from other countries. He said that Lebanon had long contributed to constructive openness and communications between East and West and that through dialogue the Lebanese would continue to develop its political system and improve its democratic practices. Reverting to its commitment to the Baabda Declaration, Lebanon disassociated itself from the negative fallout of the regional crisis and the policy of axes, he said. It was equally essential to reach an agreement on the national strategy to ensure the exclusive defence of Lebanon in the face of Israel’s hostilities and continuing threats, he added. The Lebanese, he said, must also finalize the adoption of administrative and legal measures to enable the country to benefit from its resources and sovereign rights to offshore gas and oil fields. To achieve these goals, he said Lebanon would need the help of friendly and brotherly countries. He noted that major regional challenges were negatively affecting Lebanon, particularly the security and economic repercussions resulting from the Syrian crisis. Despite the Baabda Declaration, he said that some Lebanese parties had been involved in the ongoing conflict in Syria, and Lebanese territories were under violations and aggressions from the Syrian side of the border. This involvement, he added, coincided with terrorist bombings against civilians, particularly in the southern suburb of Beirut and in the capital in the north, Tripoli. Furthermore, he said that the unprecedented influx of Syrian refugees was way beyond Lebanon’s capacity of assimilation, exceeding one fourth of his country’s population. As a country with exiguous geographical area, he said that resources and capabilities were limited. He thus called on States to provide sufficient funds and human and financial resources to regulate the presence of the Syrian refugees, and to meet their basic humanitarian and livelihood needs. On this front, he noted pledges made at the meeting of Donor States hosted by Kuwait in January 2013 had only been partially fulfilled. He said that Syrian refugees should be lodged inside safe zones within Syria, outside the reach of the ongoing conflict, since Syria was eighteen times the size of Lebanon, and an international conference should be held to further address the issue. The main challenge still derived from the repercussions of the Arab-Israeli conflict, he said. Lebanon had suffered from consecutive Israeli attacks, including from “prohibited weapons”. He thus called for continued work on imposing and implementing United Nations Security Council resolution 1701 (2006), and thanked those participating in the United Nations Interim Force in Lebanon (UNIFIL) for their dedication and sacrifice. As for Syria, he condemned the use of chemical weapons and called on the United Nations, including the Security Council, to hold the perpetrators responsible. He said that the last American-Russian agreement regarding those weapons would be an introduction to the desired comprehensive peace solution. The Arab world, he said, was undergoing a major historical transitional period due to the amazing scientific progress that was “coming up overnight”, especially in the fields of communication and information. He said that this progress had spread a character of globalization across all walks of life. However, he noted that regimes had not undergone corresponding intellectual progress. On the contrary, some extremist, terrorist, and isolationist trends refused dialogue and coexistence, he said, adding this had driven some to claim a return to religious “emirates” and racist seclusion. However, amidst those fundamentalist tendencies, he said that Lebanon remained a laboratory and an example for the desired mode of coexistence for tomorrow’s world.