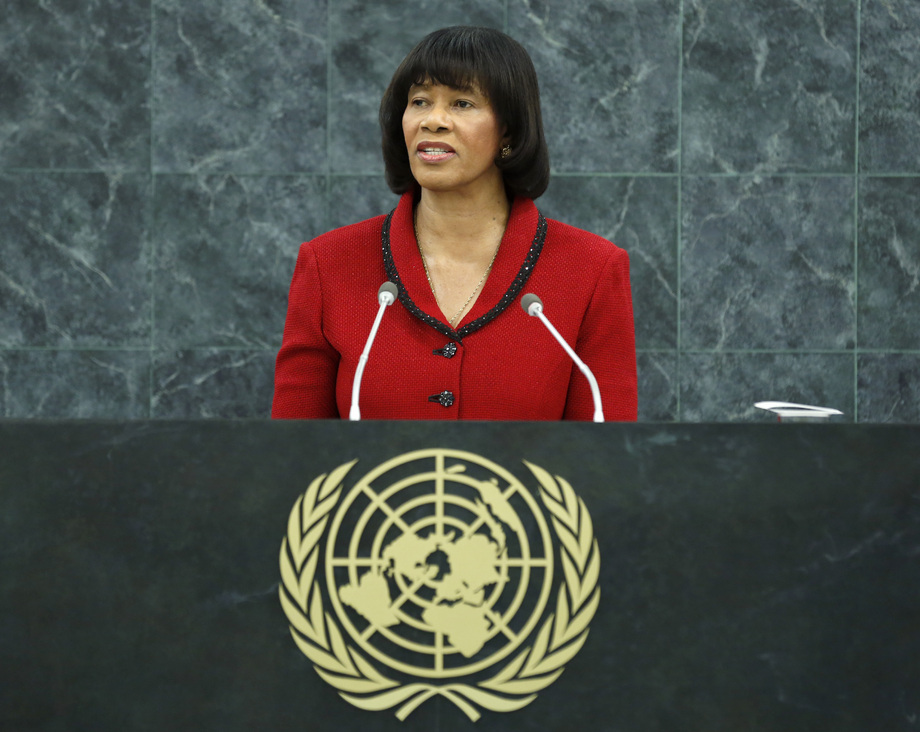 PORTIA SIMPSON MILLER, Prime Minister of Jamaica, underlined the need to accelerate efforts to fulfil the Millennium Declaration in the limited time remaining, quoting her country’s national hero, Marcus Garvey, who said that too many people faced the “hellish state” of poverty. The post-2015 development agenda should complete the unfinished business of the Millennium Development Goals and balance the need for robust economic growth, job creation, poverty eradication and protection of the environment.

She hoped that people with disabilities received attention, also calling for action to tackle non-communicable diseases and the high human toll taken by road traffic accidents. Development efforts needed sustainable and innovative financial backing and middle-income countries needed special attention. Job creation, especially for youth, was essential amid high global unemployment and working poverty. Social protection schemes providing for people’s basic needs and empowering self-advancement were needed to stop people from “falling through the cracks, being overlooked and failing to achieve a decent quality of life”, she said, adding a call for a focus on children. She pointed to Jamaica’s extensive efforts to meet its obligations to children, and she condemned violence and abuse against children.

Highlighting the issue of human trafficking, she recalled “the horrors and evils of slavery — in history and in this modern-day form”. Unity was needed to stamp out a transnational scourge wherever it existed and to bring its perpetrators to justice. Nothing resembling slavery should ever be tolerated, she added. She was working with the Caribbean Community and African Union members to erect a permanent memorial to the transatlantic slave trade at the United Nations and a design had been chosen. She was grateful for contributions, but also expressed support for an international discussion on reparations and she supported the initiative for a decade for persons of African descent.

The quest for development required peace and security, she said, highlighting transnational organized crime. Increased collaboration was needed and she welcomed the recent agreement on the Arms Trade Treaty, which was one of several steps necessary for the international community to tackle terrorism, crime and violence. Jamaica was working towards ratification of the Treaty and called for bilateral and regional cooperation to help deal with crime, violence and security issues. She expressed concern over the situation in Syria, noted firm commitment to lasting peace in the Middle East and reiterated her call for an end to the embargo against Cuba.