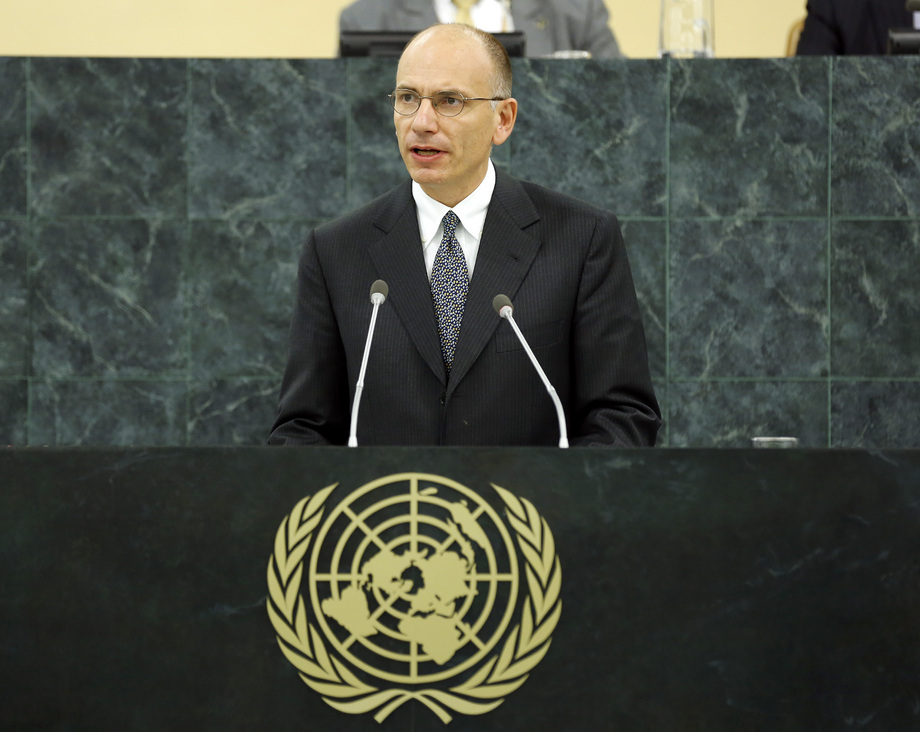 ENRICO LETTA, Prime Minister of Italy, said that with the end of the global crisis within reach, it was imperative to make growth and development the first priority. Remarkable progress had been made on the Millennium Development Goals; however, the capacity of economic and social systems to adapt to the world’s rapid changes should be increased. Regarding the post-2015 development agenda, he stressed the need to address the causes of the global ills, rather than limiting the efforts to only the side effects. Of the view that sustainable development was “the best antidote”, Italy had co-facilitated the establishment of a High-level Political Forum on Sustainable Development, with universal membership. He said that development could not simply be reduced to economic growth and statistics, but must pay adequate attention to the quality of life. On the issue of women’s rights and gender balance, he said that more female participation in the global economy meant more equality and growth. Food security should be a priority area of action, since it incorporated the crucial issue of a sustainable relationship between consumption and production. Opportunities to exchange best practices on global sustainability in the area of food security and nutrition were welcome. As underlined to the heads of the United Nations agencies based in Rome, Italy called for the launch of a new global consensus on food. An integrated approach to development involved a focus on social development, he said. The projected rise of the world population highlighted the serious problem of unemployment, particularly among young people. Focusing on small and medium-sized enterprises could create jobs for young people and contribute to social stability. Also in the employment sector, great attention must be paid to people with disabilities. On the issue of migrants, he highlighted Italy’s commitment to their fundamental human rights and to the need to prosecute criminals who engaged in human trafficking. “We should all fight what Pope Francis called the globalization of indifference and feel the suffering of these migrants as our own,” he said. He strongly condemned the crisis in Syria, inviting members of the Security Council and other relevant international stakeholders to search for political solutions. He welcomed efforts towards the elimination of Syria’s chemical weapons. Faced with the deterioration of the humanitarian situation in that and other countries, Italy had intensified its humanitarian assistance, pledging in 2013 $30 million, as well as new humanitarian and emergency initiatives for an additional $50 million. He confirmed the country’s support of the Somali Government in its efforts to lay the foundations for a united federal State. As the highest contributor to Libya, Italy continued to support its stabilization and democratic transition. On Mali and the Sahel region, he highlighted the current funding of training for border police in Mali and Niger, in line with the strategy presented by the Special Envoy of the Secretary General for the Sahel. In sum, Italy’s participation in 10 United Nations peacekeeping missions, as well as its financial contributions to the United Nations general budget, was testament to its commitment to peace and stability. But “wherever human rights are at risk, global peace and security are at risk”, and thus Italy promoted actions to address those most vulnerable, including women, children, religious and ethnic minorities, lesbian, gay, bisexual and transgender persons, human rights defenders and humanitarian workers. He also called for religious tolerance, in light of the recent atrocities in Pakistan. At the same time, Italy continued to prioritize the campaign for a worldwide moratorium on the death penalty. In light of Italy’s upcoming Presidency of the European Union in 2014, he called for the European Union to rise to a leading role on the world stage. Increased trade exchanges with the rest of the world were welcome, and he urged Europe to attain more unity and more effective governance. Reform of the United Nations Security Council was absolutely necessary, and to bridge the gap between the different models, Member States should be ready to engage in the next round of negotiations with a higher degree of flexibility and openness to compromise.