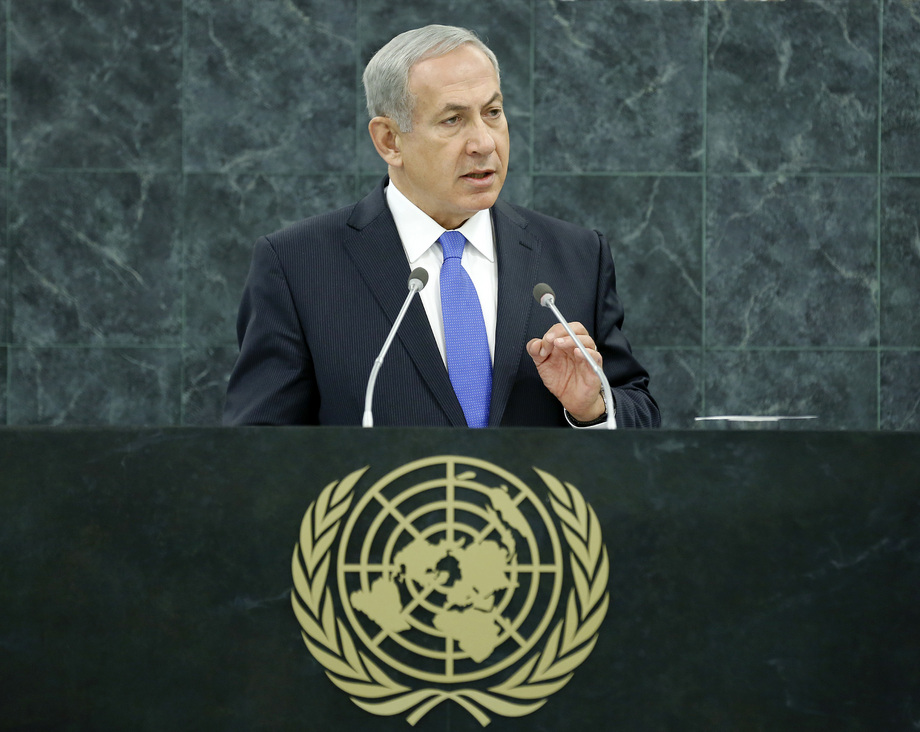 BENJAMIN NETANYAHU, Prime Minister of Israel, said there was a “striking, extraordinary” contradiction between the President’s words and Iran’s actions. Though he praised Iran’s democracy, the regime executed political dissidents by the hundreds, jailed them by the thousands and had participated directly in murdering and massacring tens of thousands of men, women and children in Syria. President [Hassan] Rouhani had condemned terrorism, yet in the last three years, Iran had planned, perpetrated or ordered attacks on five continents. It was trying to change the regional balance through proxies, actively destabilizing Yemen, Lebanon, Bahrain and other Middle Eastern countries. While promising constructive engagement, Iranian agents had tried to assassinate Saudi Arabia’s Ambassador in Washington, D.C., and weeks ago, an Iranian agent had been arrested while trying to collect information for possible attacks against the United States Embassy in Tel Aviv.

He said that President Rouhani had called on nations to “join his wave against violence and extremism”, but the only waves Iran had generated in the last 30 years were the waves of violence and terrorism it had unleashed in the region and across the world. “I wish I could believe Rouhani, but I don’t because facts are stubborn things and the facts are that Iran’s savage record flatly contradicts its President’s soothing rhetoric,” he added. He claimed that his country had never chosen deceit and secrecy in its pursuit of a nuclear programme, he continued. However, it had been caught “red-handed”, while secretly building an underground centrifuge facility in 2002, as well as a huge underground nuclear facility near the mountains of Qom in 2009. President Rouhani had told the international community not to worry because those facilities were not intended for nuclear weapons, but it did not make sense that a country with vast natural energy reserves would invest billions to develop nuclear energy, defy multiple Security Council resolutions, incur the crippling cost of sanctions on its economy, develop intercontinental ballistic missiles with the sole purpose of delivering nuclear warheads, and build hidden underground enrichment facilities.

Ballistic missiles were not intended to carry TNT across the globe, but nuclear warheads, he said, warning that Iran’s missiles would be able to reach New York City in three years. In 2012 alone, Iran had enriched three tons of uranium to 3.5 per cent, doubled its stockpiles, added thousands of new centrifuges, including advanced ones, and continued to work on a heavy water reactor in Iraq, so that it could have another route to the bomb. Since President Rouhani’s election, that vast and feverish effort had continued unabated. Iran was positioning itself to race across the “red line” that Israel had drawn, and build nuclear bombs before the international community could detect or prevent it. Yet, it faced the big problem of sanctions, he said, emphasizing that combining tough sanctions with a credible military threat was the only way peacefully to prevent Iran from developing nuclear weapons. That policy was bearing fruit today as the Iranian currency plummeted and its banks became hard pressed to transfer money. History had taught that to prevent war tomorrow, one must be firm today.

To stop the threat diplomatically, he said, Iran must cease all uranium enrichment, remove the stockpiles of enriched uranium from its territory, dismantle the infrastructure for nuclear breakout capability, stop all work on its heavy water reactor and cease production of plutonium. Those steps would end Iran’s nuclear weapons programme and eliminate its breakout capability, he said, adding that the international community must keep up the sanctions and strengthen them if necessary. Israel would never acquiesce to nuclear arms in the hands of a rogue regime that repeatedly promised to wipe Israel off the map, he emphasized, adding that it would have no choice but to defend itself against such a threat. If forced to stand alone, then it would do so while remaining fully aware that it was defending many, many others. The possibility of a nuclear-armed Iran and the emergence of other threats in the region had led many Arab neighbours finally to recognize that Israel was not their enemy, he said.

He said that his country also sought a historic compromise by which a demilitarized Palestinian State and a Jewish State of Israel could live side by side. Like previous Israeli Prime Ministers, he was willing to make painful concessions, but so far, the Palestinian leaders were not prepared to offer their own painful concessions, which must be made for the sake of coexistence. Many Israelis had forebears who had worked to transform a “bludgeoned Jewish people, left for dead” into a vibrant and thriving nation defending itself with “the courage of modern Maccabees”, he said. The people of Israel had come home, never to be uprooted again.