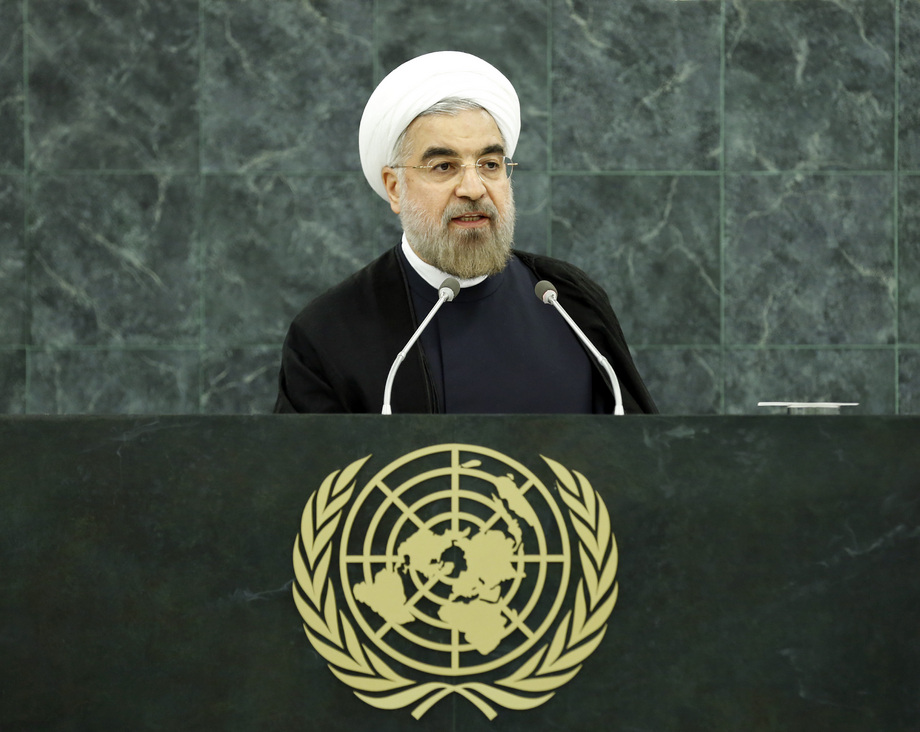 HASSAN ROUHANI, President of Iran, declared that the age of “zero-sum games” in international relations was over. Coercive economic and military policies, practices used to maintain old forms of domination, and the practice of globalizing Western values negated peace, security and human dignity, as did the persistent “cold war mentality”. There was no guarantee that the era of quiet among big Powers would remain immune from violent discourse, practices and action, he said, warning that the impact of violent and extremist narratives must not be underestimated. He went on to emphasize that “strategic violence” manifested in efforts to deprive regional players of their natural domain of action, describing containment policies, regime change from outside and efforts to redraw political borders as “extremely dangerous and provocative”. Propagandist and unfounded faith-based phobia, including Islamophobia, “Shia-phobia and Iran-phobic discourse”, seriously threatened world peace and security. The so-called Iranian threat, used to justify a long catalogue of crimes in the past three decades, had assumed dangerous proportions, he warned, emphasizing that those who harped on it were themselves a threat to international peace and security. “ Iran poses absolutely no threat to the world or the region.” Describing the continuing practices imposed on the innocent people of Palestine as nothing less than structural violence, he said there was also no military solution to the crisis in Syria. Expansionist strategies and attempts to change the regional balance through proxies could not hide behind humanitarian rhetoric, he said, adding that the global community must work quickly to end the killing of innocent people. Welcoming Syria’s acceptance of the Chemical Weapons Convention, he said that extremist groups’ access to such weapons, which was the greatest danger to the region, must be considered in any disarmament plan. The illegitimate, ineffective threat, or actual use, of force would only exacerbate violence and crisis in the region. Violence and the use of drones against innocent people in the name of combating terrorism should be condemned, he said, adding that unjust sanctions were inhumane and contrary to peace. It was vital to promote tolerance and joint action in human society, he said. All challenges could be managed successfully through a smart, judicious blend of hope and moderation. As a regional Power, Iran would act responsibly in regional and global security affairs, and cooperate with other responsible actors. It defended peace based on democracy and the ballot box everywhere, including Syria and Bahrain. Iran sought to resolve problems, not create them, he said, stressing that acceptance of his country’s inalienable right was the best solution to the issue of its nuclear dossier. Underlining the exclusively peaceful nature of his country’s nuclear programme, he said nuclear weapons and other weapons of mass destruction had no place in Iran’s security and defence doctrine. National interests necessitated the removal of all reasonable concerns about its peaceful nuclear programme. To fulfil that objective, there must be acceptance and respect for Iran’s right to enrichment and other nuclear rights. Nuclear knowledge had been domesticated and Iran’s nuclear technology had reached industrial scale. It was an illusion, and extremely unrealistic, to presume that peaceful use of the nuclear programme could be ensured by impeding it through illegitimate pressures. The country was “prepared to engage in time-bound and results-oriented talks” to build mutual confidence and remove mutual uncertainties with full transparency, he stressed, adding that it sought constructive engagement with other countries, not to increase tensions with the United States. “Commensurate with the political will of the leadership in the United States,” he continued, “and hoping they will refrain from following the short-sighted interest of warmongering pressure groups, we can arrive at a framework to manage our differences.” Iran expected to hear a consistent voice from Washington. Noting that “peace is within reach”, he proposed, as an initial step, that the United Nations consider creating a World Against Violence and Extremism, or WAVE, and invited all States, global organizations and civil institutions to participate. He also proposed the formation of a “Coalition for Enduring Peace” to replace the ineffective “coalitions for war” spanning the globe.

Iran’s representative said the United Arab Emirates’ representative had used an unacceptable term for the Persian Gulf.  As all present were certainly aware, it was an undisputed fact that the full term “ Persian Gulf” had always been used for the sea area mentioned, and countless maps drawn by various regional intuitions had all testified to that point.  Moreover, the United Nations’ practice over the past half century had made it crystal clear that the term “Persian Gulf” was the only geographical appellation for that body of water, and should be used in full without exception.  Any use of a “fake” name for that body of water was unacceptable and had no legal ground.

Further, he said, the United Arab Emirates speaker had raised some unacceptable claims about the three Iranian islands located in the Persian Gulf.  Iran reiterated its full sovereignty over those Iranian islands of Abu Musa, Greater Tunb and Lesser Tunb, and categorically rejected any claims to the contrary.  The measures undertaken on those islands had always been conducted based on the principles of Iran’s sovereignty.  His country stood ready to unilaterally discuss the matter with relevant officials, with a view to strengthening relations in various fields and resolving any misunderstanding between the two countries.

The representative of Iran stressed his country’s inalienable right to use nuclear energy for peaceful purposes, emphasizing that Iran was fully committed to non-proliferation and was cooperating fully with the International Atomic Energy Agency (IAEA).  Sometimes, its cooperation had gone beyond its obligations to build trust and confidence, he said, noting that his country supported nuclear energy for all, but nuclear weapons for no one.  Islamic teachings underpinned that stance, he noted, stressing that such weapons were the biggest threat to global security and had no place in Iran’s defence doctrine.  Iran was committed to meaningful, time-bound and fruitful negotiations to address the concerns of some, and its programme would remain exclusively peaceful, he said, urging the lifting of sanctions against his country.

Noting that the Assembly had just heard an “inflammatory statement” against Iran’s peaceful nuclear activities, he rejected that statement, saying no one could dictate to Iran, which was a signatory to the Treaty on the Non-Proliferation of Nuclear Weapons and fully committed to its fulfilling obligations.  Israel was the one in need of education, as the only non-party to the Treaty on the Non-Proliferation of Nuclear Weapons in the Middle East.  It should accede to the Treaty and put all its activities under IAEA safeguards, he said.  Israel possessed all types of weapons of mass destruction and was not a party to the treaties banning them.  Its refusal to join the conference on a zone free of weapons of mass destruction in the Middle East had prevented the convening of that event.  He said Iran had a “centuries old” policy of non-aggression, but warned Israel against “sabre rattling”, because its ability to defend itself was unquestionable.

The representative of Iran spoke on a point of order, correcting a misquote in his earlier intervention.