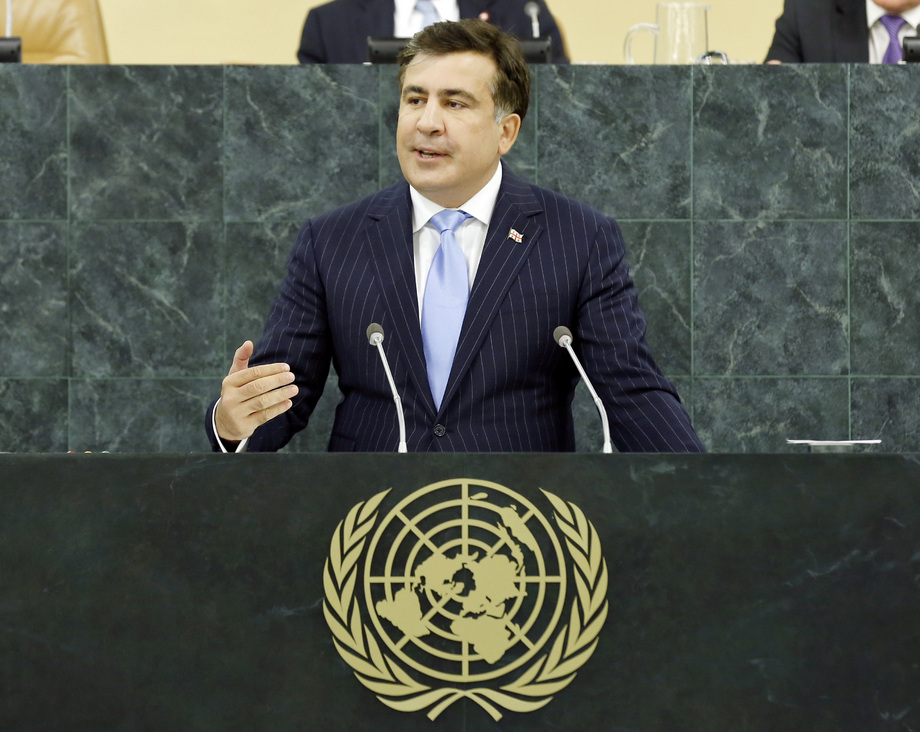 MIKHEIL SAAKASHVILI, President of Georgia, said the optimism of the early 1990s, when the spread of liberal and democratic values had seemed natural, had been crushed by a wave of pessimism and cynicism. The world was not at peace, humankind had not reconciled with itself, and the United Nations had not become the soul or the heart of a united globe. Western civilization, once triumphant, was now trying to tackle a deep economic, social and mental crisis. In Eastern Europe, the “coloured revolutions” were challenged by the forces they had defeated a few years ago, while in the Middle East, the glorious images of cheering crowds in Cairo and Tunis had been replaced by the horrendous videos of the gassed children of Damascus. But despite the many good reasons to be disillusioned, the dogmatic optimism of the 1990s should not be replaced by an equally dogmatic pessimism that suffocated hope, he emphasized. History had not ended in 1989 or 1991, and it never would. Men and women everywhere wishing to live in freedom were confronted by the forces of tyranny, he said. Eastern European countries aspiring to join the European family of free and democratic nations faced constant pressures and threats. Armenia had been cornered and the Republic of Moldova blockaded; Ukraine was under attack, Azerbaijan faced extraordinary pressure and Georgia was occupied, all because an old empire was trying to regain its bygone margins, he said. The Russian Federation had no interest in being surrounded by stable States. Rather, it sought neighbouring countries in constant turmoil. The Kremlin would not agree to discuss the de-occupation of Abkhazia and South Ossetia, and the annexation of Georgian lands by Russian troops continued. Despite recent friendly statements by the new Georgian Government, he said, the Russian military kept advancing its positions, dividing communities with new barbed wire, threatening the Georgian economy and moving towards the vital Baku-Supsa Pipeline, thereby throwing Georgia’s very sustainability into question. The Russian authorities knew perfectly well that as soon as strong institutions were built in Ukraine, Georgia, Republic of Moldova or others, those countries would reflect and enforce the will of their people for full independence and alignment with Europe. Georgia’s experience of successful reforms and its creation of a functioning State was therefore considered a virus that threatened to contaminate the whole post-Soviet region, and which should be eliminated by every means possible, he said. That was why the Georgian nation had suffered an embargo, a war, an invasion and an occupation — all since 2006. That was also the reason why the resistance of Georgia’s people and the resilience of its democracy were of the outmost importance for the entire region, he continued. Efforts to roll back the advances of the European Union and the North Atlantic Treaty Organization (NATO) in the region had a name — the Eurasian Union, shaped as an alternative to the European Union and unveiled by Vladimir Putin as the main project of his new presidency. Georgia’s people must decide whether to accept life in a world of fear and crime, in which differences were perceived as threats and minorities as punching bags, and where opponents faced selective justice or beatings, he said. The Eurasian Union was both the recent past and the future shaped for the region by some ex-KGB officers in Moscow, but Georgia would instead be led towards Europe. Russian mouthpieces identified the European Union with the destruction of family values, the erosion of national traditions and the promotion of gays and lesbians, he said. The threat was that Georgia’s traditions would collapse under Western influence, that Christian holidays would be replaced by gay pride events, and Churches by “multicultural Disneylands”, and that the Orthodox identity was under threat. However, Georgia’s history taught that tolerance was the basis for sovereignty in the region, he said, adding that it was not only a moral duty, but an issue of national security. Describing the European Union as the greatest political success of recent decades, he said it was built on three pillars: rejection of extreme nationalism, rejection of communism, and rejection of colonialism and imperialism. However, the Eurasian Union was based on precisely the opposite premises. To join the Eurasian Union was very easy, because there were no social, economic, or political criteria to be met. All one had to do was become a colony, which required no effort at all. Passivity and mediocrity were the only requirements, he said, predicting that rejection of the empire would happen not in the coming decades, but in the coming years.