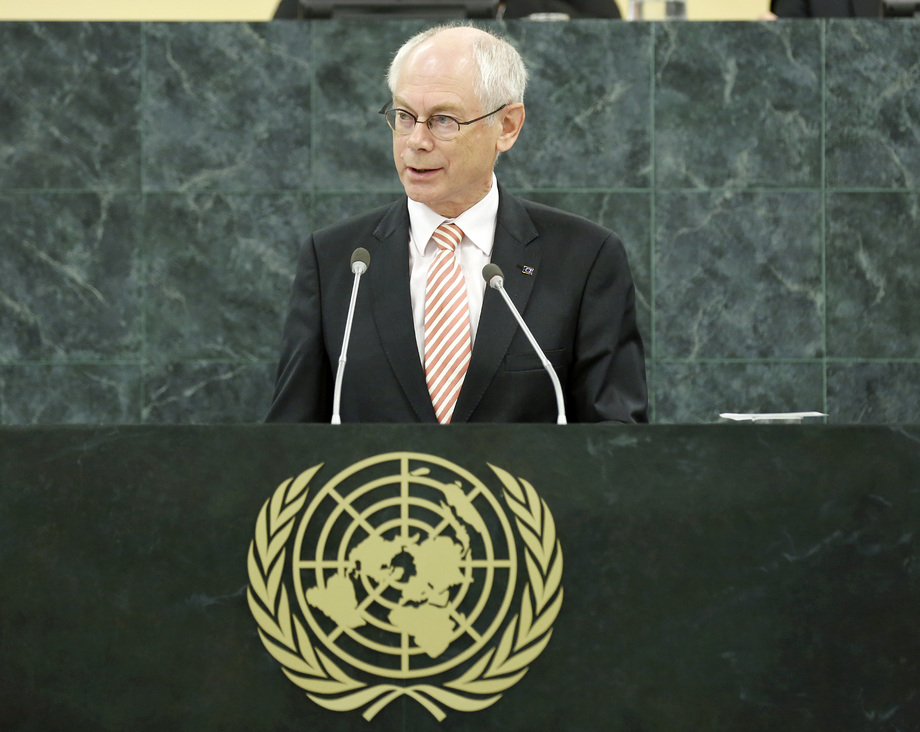 HERMAN VAN ROMPUY, President of the European Council, European Union, recalled last year’s general debate, which had seen unity among States deploring the civil war in Syria, where 25,000 had died and 250,000 had become refugees. A year later, 100,000 people were dead and refugees numbered 2 million. “What will the situation be when we meet next year?” he asked. Prolonging the “paralysis of the international community” was untenable, particularly in light of the chemical weapons attack in Damascus. Syria’s agreement to destroy those weapons helped the world avoid setting a dreadful precedent on their use, which was an “abhorrent crime against humanity”. Once the inventory was complete, the Security Council and OPCW must destroy Syria’s stocks swiftly. He pled for a clear Security Council resolution. Following the agreement on weapons, he said there was “more scope for quiet hope” than a few weeks earlier. Now was the time to pursue Geneva II and to push all parties to the negotiating table. For Geneva II to work, honesty was needed. The process of ending the war and reaching reconciliation would be hard, requiring political will and compromise, but the cost of hesitation was too great. Europeans knew how difficult reconciliation was, having suffered many wars, but time, courage and perseverance were needed to prevent the destruction of Syria and to ensure that the promise of the Arab Spring was met there. He promised Syrians European help, noting that the European Union was the largest provider of aid. Additionally, he said, the Union would continue playing an important role on the global stage, as a faithful peace and development partner to many countries around the world. Despite the financial crisis, it had not withdrawn from its global responsibilities and all European Union financing in the common European budget had been maintained. There was also strong European engagement on climate change and support for the Paris Conference set for 2015. The Union had launched five new missions: in Mali, South Sudan, the Sahel, on Libya’s borders and off the coast of Somalia. The operational mandates for missions in Afghanistan, Georgia and the Democratic Republic of the Congo had also been renewed. After being shaken by the financial crisis, Europe was addressing imbalances and putting its house in order, he said, calling on other States to do so as well. Results were emerging in Europe; the existential threat to the Union had been averted and attention was now turned to improving prospects for employment and growth. It would take time to rebuild strong economic growth and jobs, but once established, they would be long-lasting. Economic growth was forecast for all but 1 of the Union’s 28 countries and the political will to preserve Europe’s unity remained strong. The international community could and must renew itself, he said, stressing the common responsibility of States to ensure that everyone present translated the positive signs into concrete progress for peace and prosperity. He reiterated his call for dialogue and negotiation and for the conclusion of international agreements to ensure that progress went beyond exchanges of words. It was true for Syria, the Middle East peace process, and Iran, and it was equally true for other major challenges, such as climate change, international trade, and financial regulation, on which meetings would soon be held.