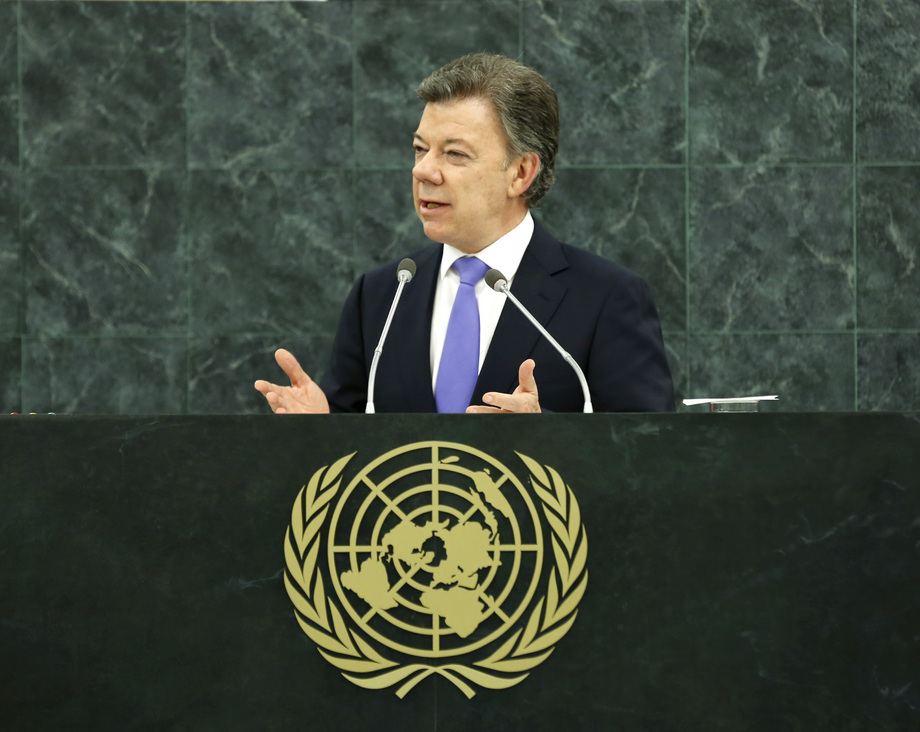 JUAN MANUEL SANTOS CALDERÓN, President of Colombia, speaking about a Colombian woman, said that, two decades ago, armed members of illegal groups arrived in her village, determined to impose their rule of terror. They murdered her husband and two other relatives. With her children, she had fled empty-handed, carrying only the weight of her tragedy. Today, that woman, Maria Zabala, was a courageous and inspiring leader for peace. Sadly, there were thousands of cases like hers in Colombia, he said, noting that, over the past 50 years, more than 220,000 people had died because of the conflict — twice as many as the death toll of the Bosnian War, in former Yugoslavia. In fact, he said, the conflict in Colombia was the oldest and the last in the Western hemisphere. Yet, amid the conflict, his country had achieved much in terms of security, poverty eradication and economic performance. However, continuing to coexist with the conflict would be like sentencing millions of people to more years of violence, fear, poverty and of victimization. “My generation has not seen one single day of peace, and my dream is for my children and the children of all Colombians to have the chance to see it,” he said, adding his hope that the “guerrillas understand that the time has come to leave this 50-year confrontation behind and that the time has come to change from bullets to votes”. Ms. Zabala was among those who were entitled to justice, truth and reparation, he said, noting that his Government had promoted legislation to recognize and repair the victims of conflict, a bill that he had enacted in the presence of the United Nations Secretary-General. Colombia would bring an end to the conflict, but that did not mean relinquishing justice, truth and reparation for the victims. His might have been the first country to have engaged in such a process. Indeed, the Government had adopted an international strategy for transitional justice and pioneered the implementation of such measures amid the conflict, of the view there could be no impunity for crimes against humanity or war crimes. Drug trafficking had been the main funding source for violence and terrorism in his country, he noted, exclaiming: “If we manage to get the guerrillas, once they’ve demobilized, to change sides and become an ally of the State, to curb drug trafficking and end illegal crops, just imagine what it would entail!” He went on to express hope that the United Nations special session on drugs in 2016 would discuss conclusions of various studies. Lastly, he said, Colombia was deeply committed to environmental protection. At Rio+20, his Government had driven the proposal aimed at establishing the Sustainable Development Goals as a mandatory benchmark in the development agenda for the decades to come. “ Colombia is contributing a lot,” he said, noting that, a few weeks ago, the area of the largest national natural park, the Chiribiquete Park, in the Amazon had been doubled to roughly the size of Belgium.