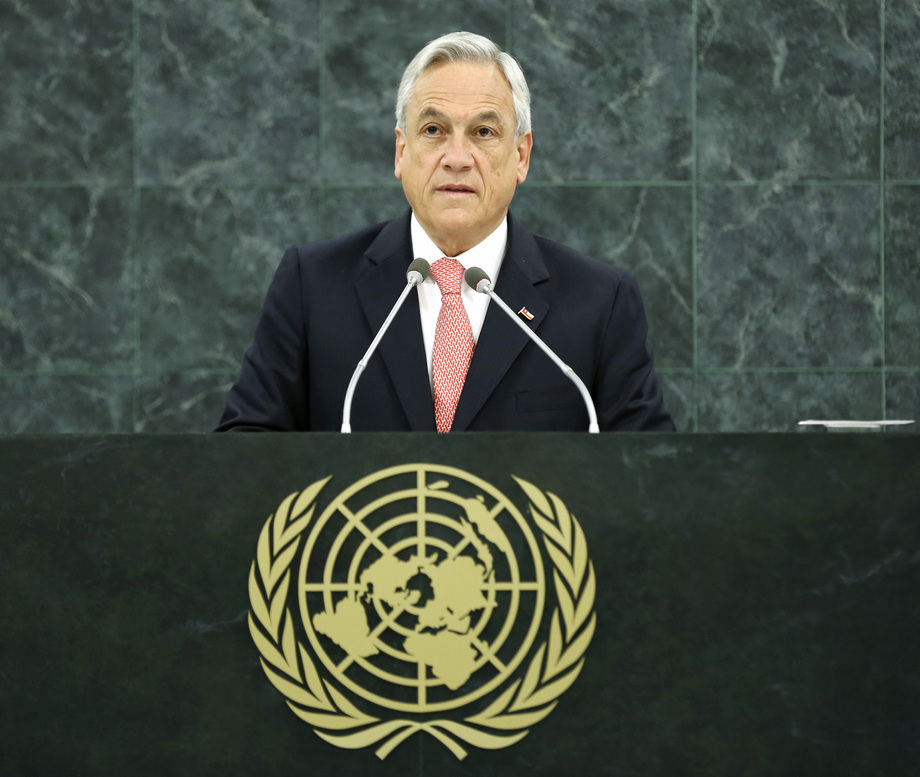 SEBASTIAN PIÑERA ECHEÑIQUE, President of Chile, stressing that the world of today was very different from the one in which the United Nations had emerged, called for a parallel evolution of international institutions. “A good starting point is progress towards real and far-reaching reform of the Security Council.” Emphasizing the need for enlarging the permanent and non-permanent membership of the Council to ensure proper regional representation, he urged countries with the right of veto to refrain from exercising that right in situations of crimes against humanity, war crimes, genocide or ethnic cleansing. Ultimately, he said, the rationale of the veto needed to be abandoned, calling it a relic of a world that no longer existed. Special quorums would be a more suitable replacement, so that the most important decisions concerning international security could be adopted by large and forceful majorities, making them more representative of the community of nations. Reiterating Chile’s opposition to the proliferation of nuclear and other weapons of mass destruction, he also called for the dismantling of those already in existence. Condemning the use of chemical weapons in Syria, he welcomed the recent framework agreement concluded by the United States and the Russian Federation to destroy Syria’s stockpile and lauded the international community’s efforts to solve the armed conflict there. Chile also hoped to welcome the State of Palestine as a full member of the United Nations. Turning to his region, he noted that Chile, together with Mexico, Colombia and Peru, had embarked on a far-reaching integration initiative in the form of the Pacific Alliance and had abolished tariffs on imports from least developed countries. Drawing upon his country’s experience, the President enumerated four lessons universally applicable to the emerging world. First, were the moral and legal rules — against torture, terrorism, politically motivated assassination, forced disappearances and violence against civilian populations — which must be respected by all. The second was never to take for granted the values of democracy, peace and civil amity. “They are somewhat like a tree that needs to be watered every day in order not to wither and dry up.” The third lesson, he continued, was the close relationship between the quality of democracy, economic progress and social justice, and the need to build mutually reinforcing policies in those areas. The fourth was to avoid being prisoners to history while discussing, interpreting and remembering — “because, when the present is anchored in the past, the only thing we lose is the future”.