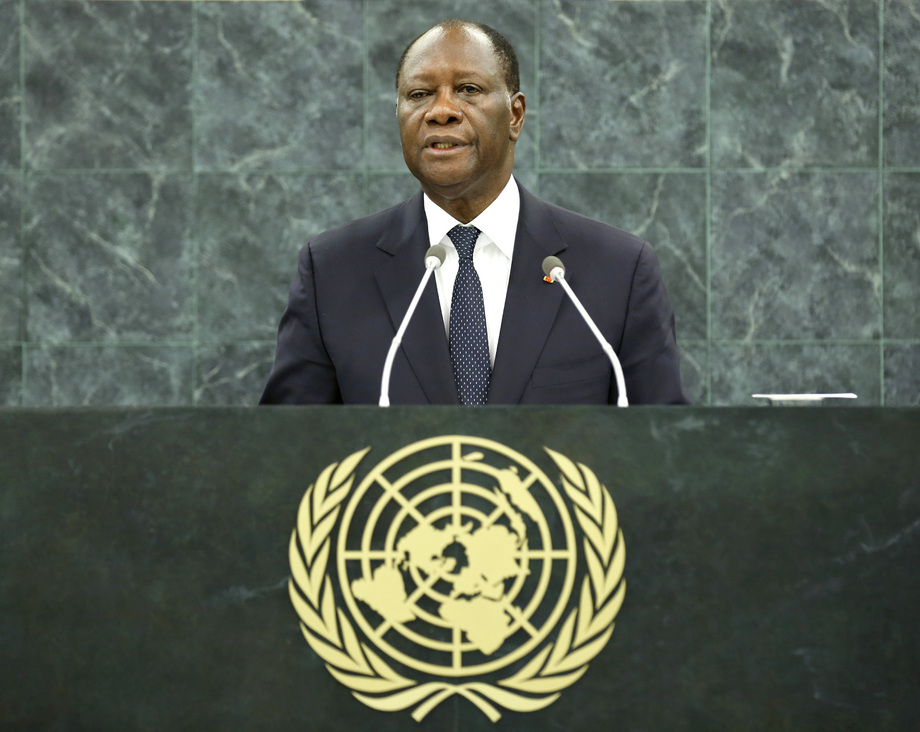 ALASSANE OUATTARA, President of Côte d’Ivoire, welcomed Secretary-General Ban Ki-moon’s personal involvement in the adoption of a General Assembly resolution on conflict in Africa, stressing that his country was now “busy” with rebuilding itself from strife and had already returned to the path of economic development. The Government had built democratic institutions, with reconciliation talks under way. “Challenges remain, but we are on the right path,” he declared. He noted that the theme of the current session, “The Post-2015 Development Agenda: Setting the Stage,” called on world leaders to consider the international community’s capacity to meet those challenges. Although much remained to be done, it was important to highlight that many countries had achieved the Millennium Development Goals and were ready to build on the progress made in such areas as primary school enrolment, vaccination and the slowing of the spread of HIV/AIDS. By adopting development goals, Member States assumed collective responsibility for the well-being of mankind, he added. In Côte d’Ivoire, he went on, the achievement of the agreed Goals had been deadlocked, but thanks to favourable economic performance, it started moving forward. The Government had adopted an ambitious national reconstruction plan for 2012-2015, with the aim to create 200,000 jobs a year, a considerable number given the country’s size. He also stressed the need for international solidarity, as many African nations were lagging behind in achieving the Goals. Yet, they could now count on the African economy that was growing at a robust rate. But achieving the desired world was not possible without addressing security, he said, adding that conflict and war undermined development efforts. Terrorism, trafficking in weapons, drugs and human beings, and maritime piracy were among the many threats. The terrorist attacks in Kenya highlighted the urgent need to address terrorism. International governance must become more democratic, he urged, emphasizing the importance of multilateralism. In that regard, he commended international efforts to restore the territorial integrity of Mali and safeguard elections there. “Threats go beyond the border of the continent,” he said, noting the need for a concerted global response, while urging donor contributions. Turning to Guinea-Bissau, he called on Member States to extend support and funding to help the Government hold successful elections in November. The right to development for all, which was upheld by the Millennium Declaration in 2000, must be realized.