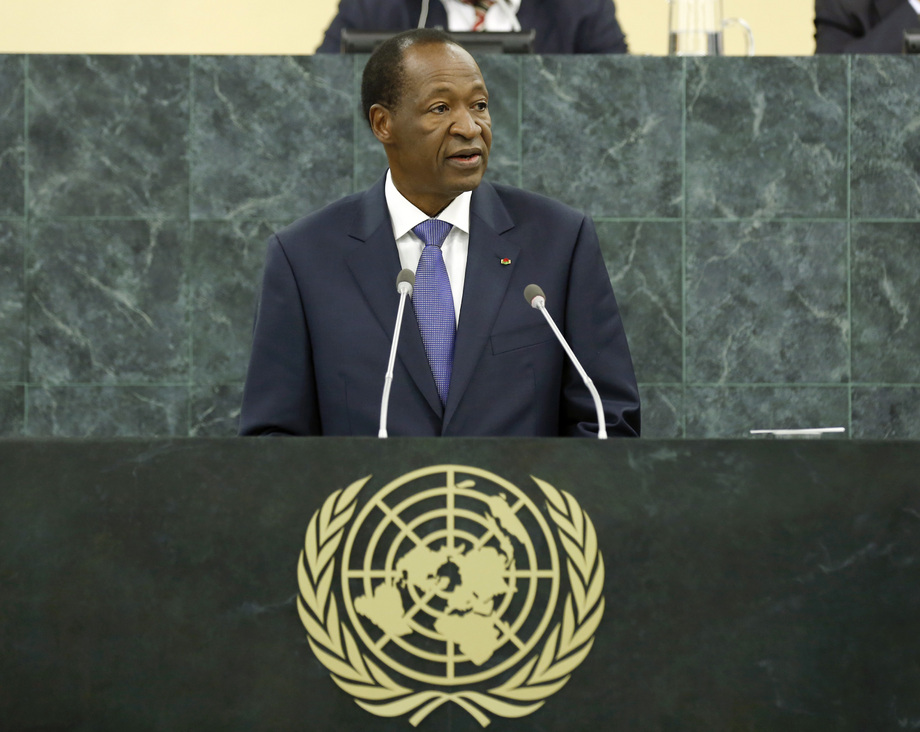 BLAISE COMPAORÉ, President of Burkina Faso, listed the many crises that were calling on the consciences of individuals to work to provide humanity with peace, stability, security, and the tools needed for the better management of global evolution. West Africa retained the stigma of the multidimensional crises that had plagued the region for decades, and the Sahel remained a hideout for drug traffickers and terrorists. He saluted the improved situation in Mali achieved by deployment of the United Nations Multidimensional Integrated Stabilization Mission in Mali (MINUSMA), and he welcomed presidential elections. The United Nations strategy for the Sahel would help enhance stability in Mali and the entire area, and he was determined to contribute to achieving its objectives. He noted that Burkina Faso had 2,000 peacekeeping troops deployed in missions of the African Union and Economic Community of West African States (ECOWAS), and it also supported the resolution of political and social crises outside West Africa. He supported efforts in the Central African Republic, the Democratic Republic of the Congo, the Great Lakes region overall, Somalia, and in the Sudan. He also favoured an equitable solution for the people of Western Sahara and lent his support to Morocco’s compromise suggestion that the area be granted autonomy rather than full independence. Beyond Africa, he called for the urgent end to hostilities in Syria, encouraging implementation of the agreement between the United States and Russian Federation on chemical weapons. Also welcome had been renewed negotiations between Israel and Palestine. He was pleased by the climate of dialogue and détente that was characterizing relations between China and the Republic of China (Taiwan), and he called for Taiwan’s inclusion in United Nations specialized agencies, particularly the Civil Aviation Organization and the United Nations Framework Convention on Climate Change. He saluted Taiwan’s efforts to help developing countries in Africa, such as his own. Peace in Africa required development programmes that provided real responses to the incertitude stemming from the poor economic situation, he said. Burkina Faso was a landlocked country seeking to boost growth and ensure a better quality of life for its people, he said, adding that the Millennium Development Goals deadline was approaching. The theme of the General Assembly session raised the issue of the relationship between development, peace, and security and offered an opportunity to reflect on a new vision of global progress founded on strong international solidarity behind sustainable development. It was important to step up efforts to resolve environmental issues by taking up questions raised during Rio+20. Enhanced multilateralism was needed across the board, but particularly on the issue of peace and security, he said. A greater push for the application of the principles of the United Nations Charter was needed and it was time to boost the performance of bodies such as the Security Council. The work done in the General Assembly could help to achieve that, he concluded.