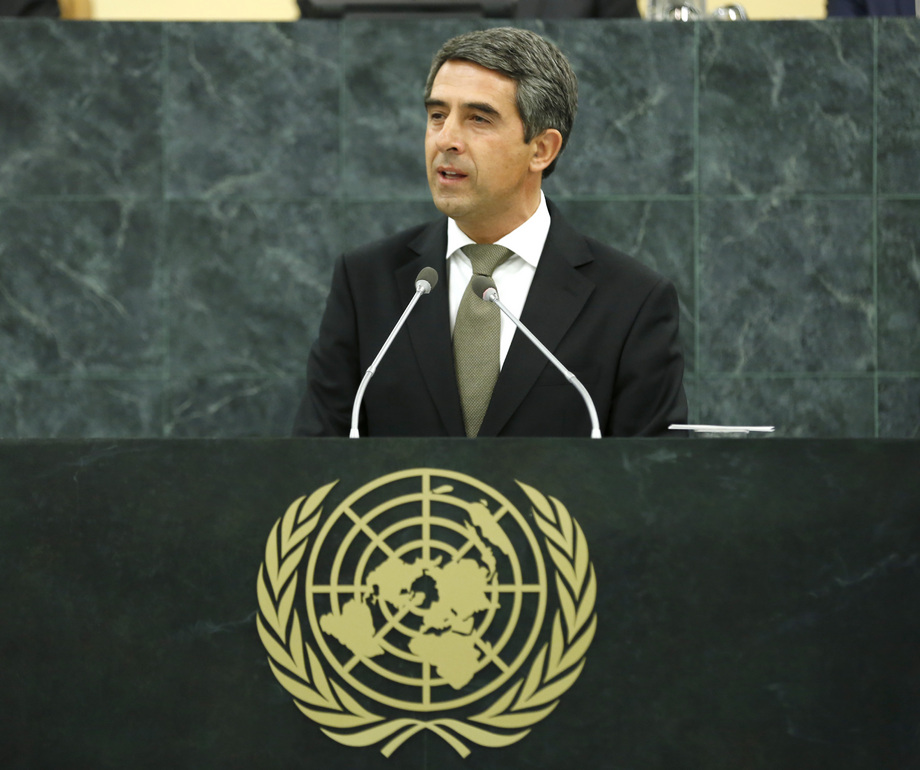 ROSSEN PLEVNELIEV, President of Bulgaria, comparing the implementation of the Millennium Development Goals to “unfinished work”, declared that it was hard to accept today that more than a billion people, including children, still suffered from extreme poverty and malnutrition; millions of children were deprived of education and access to sanitation; and basic health services for many women and new born babies remained a remote luxury. Despite all efforts, war and conflicts continued; causing thousands of deaths and leading to humanitarian crises and human suffering; human rights and fundamental freedoms violations continue, and countries refused to work together for a better future.

He called on the international community to mobilize all available means and resources to “finish what we have started”, in order to achieve truly sustainable results for humanity and the planet. He denounced the Syrian conflict; particularly the 21 August chemical weapons attack that claimed more than a thousand innocent lives, including those of children, as a major source of concern and risk to regional and global security. Urging perpetrators of those attacks to be held accountable, President Plevneliev welcomed the framework agreement between the United States and the Russian Federation to place Syria’s chemical weapons arsenal under international control, and called on the United Nations Security Council to unite in upholding its responsibilities.

The Bulgarian leader expressed his expectation that Iran would demonstrate a clear political will and address the concerns of the international community by providing credible evidence of the peaceful nature of its nuclear programme. In that respect, he urged its full cooperation with the International Atomic Energy Agency (IAEA). Also concerning the Middle East, he said he was encouraged by the resumption of direct peace talks between Israel and the Palestinian Authority.

He condemned terrorism as one of the most horrific crimes and challenging threats to international peace and security. To that end, he expressed Bulgaria’s condolences to the people and Government of Kenya for the terrorist attack suffered by the East African nation last weekend. A terrorist attack at a Bulgaria airport in July 2012 “changed Bulgaria forever” and was a reminder that the fight was a common cause, on which the international community must stay united. The last 25 years of Balkans’ history was a great example of what could be achieved when neighbours worked together. Building trust, good neighbourly relations, stability and security in south-eastern Europe and in the Black Sea region was among Bulgaria’s priorities, and the European Neighbourhood Policy remained one of the most efficient instruments of the European Union.

Touching on several other areas of interest to his Government, he welcomed the high-level meeting on the implementation of the Millennium Development Goals with regard to persons with disabilities. On United Nations reforms, his country was convinced that the United Nations should stay the course of its reforms, in order to enhance the system’s efficiency, representativeness and transparency. “This includes a revitalized United Nations General Assembly, a strengthened Economic and Social Council and the [United Nations] Security Council reflecting contemporary realities,” he declared.

He said that, while world was still a long way from the future it wanted, the Rio+20 Conference had outlined a comprehensive agenda for further work to be completed in the three dimensions of sustainable development. The recently published report of the high-level panel of eminent persons had contributed to the vision for a post-2015 development agenda, and, in his view, represented key proposals for transformative shifts and a global, people-centred and planet-sensitive agenda. Bulgaria believed the new universal and legally binding climate agreement, to be signed in 2015, should reinforce a next, overarching development agenda and speed up the international community’s efforts to introduce new sustainable models of growth. He added that culture and education also should be accorded their “rightful place” in that blueprint.