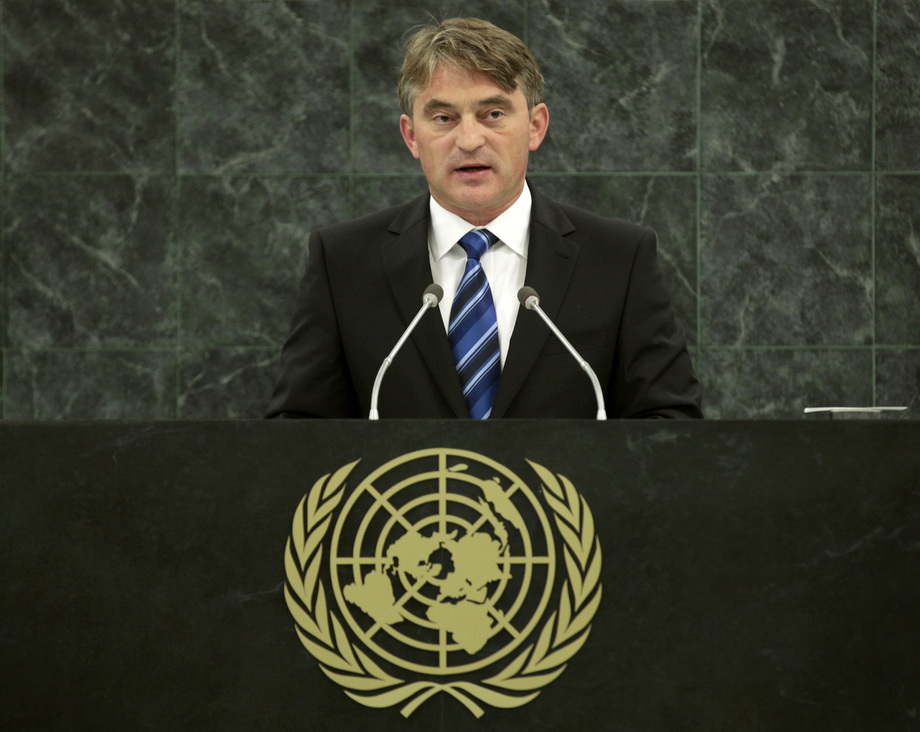 ŽELJKO KOMŠIĆ, President of Bosnia and Herzegovina, said his Government remained focused on furthering its formal institutional relationship with the European Union, in line with the Stabilization and Association Agreement, in order to become a full European Union member.  By expediting implementation of the Sejdic-Finci ruling of the European Court of Human Rights and other remaining activities, he said that Bosnia and Herzegovina would meet all accession requirements.  He expressed hope that it would fulfil the conditions of the North Atlantic Treaty Organization (NATO) Membership Action Plan and further integrate into NATO security structures.  He added that his country was in the final stages of negotiating accession to the World Trade Organization (WTO).

Turning to his Government’s stance on war crimes, he said all those accused of such crimes must be held responsible in either domestic or international courts.  He stated that Bosnia and Herzegovina aimed to improve cooperation with neighbouring countries and to improve regional ties in communications infrastructure, industry, tourism, agriculture and energy.  Croatia’s accession to the European Union, he added, had bolstered Bosnia and Herzegovina’s cooperation with that country.  According to him, his Government had implemented national development, social inclusion and poverty eradication strategies in cooperation with relevant United Nations agencies.  Regional cooperation was crucial for implementing the post-2015 development framework, he noted.

Security Council reform was crucial and must occur as soon as possible, he said.  He added that another member from the Eastern European group should be given a seat on the Council, as the number of countries in that group had more than doubled in the last 20 years.  Timely conflict prevention, rather than reacting to already escalated conflicts, he said was a more efficient, less costly approach to global peace and security, adding that there was no one-size-fits-all solution to crises; every one merited individual attention.

Tangible steps were needed to prevent nuclear proliferation, he said.  States Parties to the Treaty on the Non-Proliferation of Nuclear Weapons (NPT) must be encouraged to respect their obligations, he said, adding that Bosnia and Herzegovina would sign the Arms Trade Treaty during the arms treaty event.  He expressed grave concern over the continuing violence in Syria and asked all parties to honour their obligations in line with international law and human rights.  All efforts, he said, were needed to achieve a just, comprehensive peace in the Middle East.

Bosnia and Herzegovina was doing its part to advance international relations, peace and security, he said.  It participated in the International Security Assistance Force (ISAF) mission in Afghanistan and the United Nations missions in Liberia, South Sudan and Cyprus.  He said that his country was committed to fighting terrorism, which could only be achieved through the comprehensive cooperation of as many Member States as possible.  He hailed the New Partnership for Africa’s Development (NEPAD) and efforts to set Africa on a sustainable development path.  He supported all efforts by the African Union, African Governments and the United Nations to improve the rule of law and strengthen civil society in Africa.  He noted that continued financial aid to Africa was vital and that such aid must be used efficiently and transparently.