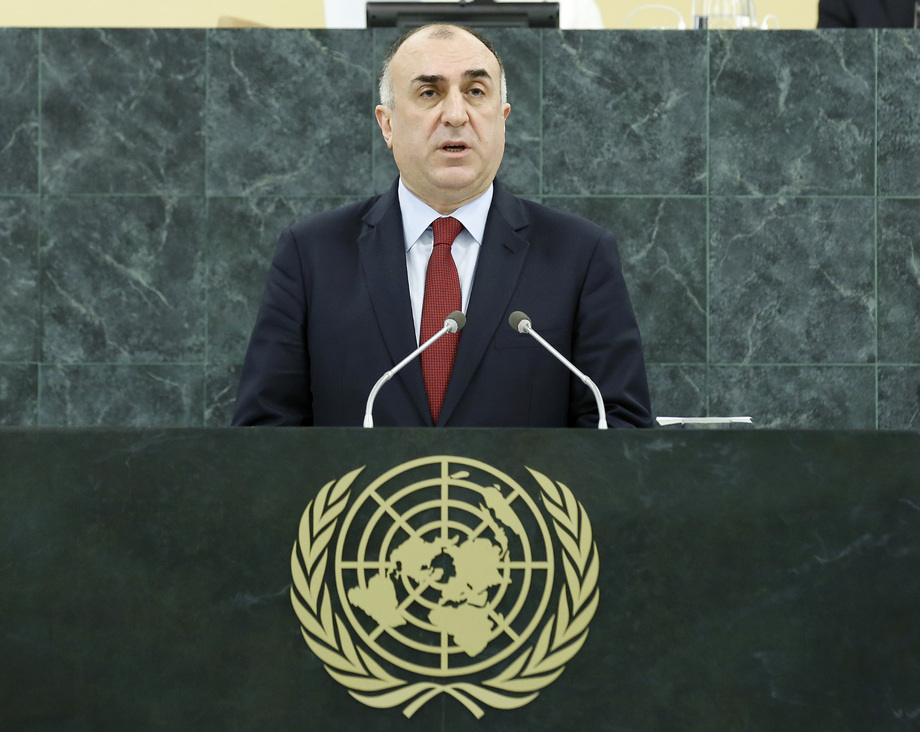 ELMAR MAHARRAM OGLU MAMMADYAROV, Minister for Foreign Affairs of Azerbaijan, noted that his country had become a donor, contributing to sustainable development efforts in Africa, Asia and Latin America. “This is a brand new chapter in our history,” he said, noting that the Food and Agriculture Organization (FAO) had recently recognized the nation’s achievement in combating hunger and meeting the Millennium Development Goal on undernourishment. Moreover, gender equality, women’s empowerment and combating HIV/AIDS had also been identified as areas for progress. Describing information and communications technology as a key element of the post-2015 development agenda, he said his country had proposed to establish the Eurasian Connectivity Alliance. Azerbaijan acknowledged the support of Member States for the regional platform through the adoption of Assembly resolution 67/298, he added. On peace and security, he recalled that in 1993, the Security Council had adopted four resolutions condemning the use of force against Azerbaijan and the occupation of its territories. The texts reaffirmed respect for the country’s Azerbaijan’s sovereignty and territorial integrity, reconfirmed the Nagorno-Karabakh region as an integral part of Azerbaijan, and demanded the immediate, full and unconditional withdrawal of the occupying forces. “To our deepest regret,” he said, those demands had not been implemented and mediation efforts through the Organization for Security and Cooperation in Europe (OSCE) had not yielded results. Against that background, he continued, Armenia had sought to distort the actual situation, downplayed the relevance of the Council resolutions and misinterpreted their provisions, with a view to deflecting the international community’s attention from the problems caused by its continuing aggression. Armenia’s annexationist claims, as well as measures to consolidate the status quo and prevent the return of internally displaced persons constituted an open challenge to the conflict resolution process and posed a serious threat to international and regional peace and security. However, Azerbaijan remained committed to the process, in the conviction that the two communities of its Nagorno-Karabakh region would one day live side by side in peace and dignity, he said.

The representative of Azerbaijan said that Armenia had lied, falsified and ignored facts.  Welcoming statements was not enough to reach an actual settlement, particularly when Armenia’s deeds were at odds with its pronouncements.  It continued illegally to control Nagorno-Karabakh, whereas Azerbaijan wished to see the enclave liberated and those forcibly displaced return.  Armenia rejected that position, in violation of international law, continuing to misinterpret Security Council resolutions.  There were facts testifying to its continued non-compliance with efforts to settle the dispute under international law.  Armenia accused Azerbaijan of aggression, but that was an “utter falsehood” as the Security Council had never mentioned aggression by Azerbaijan.  It was acknowledged, even by Armenia’s leaders, that Armenia had started the war with the aim of seizing Azerbaijani territory, and had continued to act against international efforts to stop the conflict.  Armenia was the most militarized State in the South Caucasus, he added.

The representative of Azerbaijan said Armenia had made “groundless propagandistic statements” in another unsuccessful attempt to mislead the international community.  The lies demonstrated how far it was from engaging in a search for peace in the region, and were an abuse of the right to speak from such a rostrum.  Armenia’s stance was an open challenge to conflict settlement.