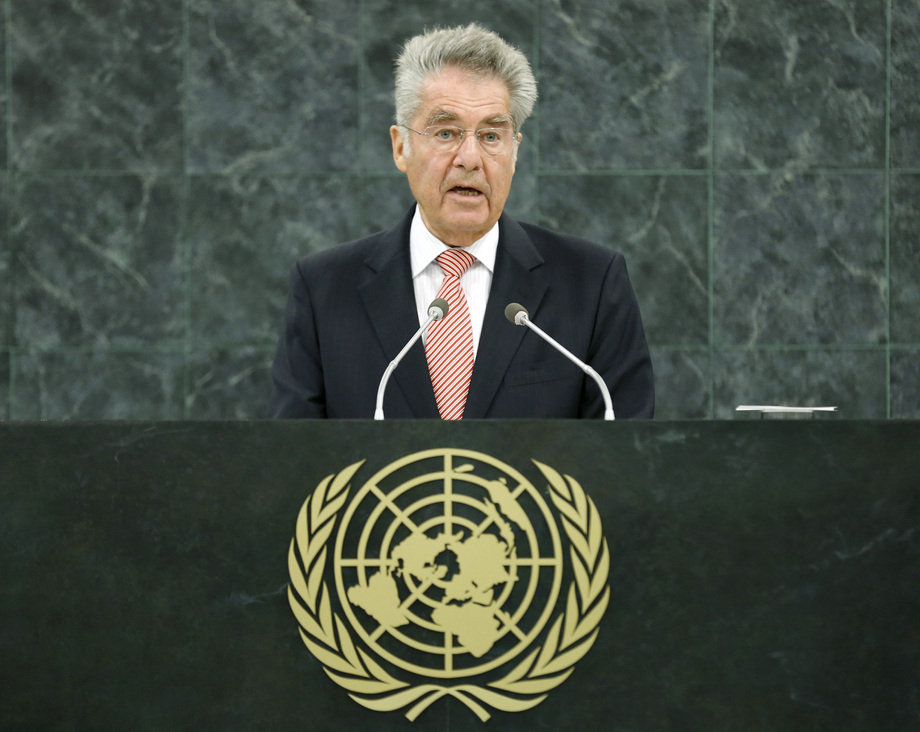 HEINZ FISCHER, President of Austria, said global security is one of the main issues of concern for his country, particularly given the recent events in Syria. He said that, while Austria had welcomed the agreement reached between the United States and Russia, ultimately, he believed the case should be referred to the International Criminal Court. “Accountability is necessary to stop the atrocities and prevent future crimes,” he said. Decisive leadership would be needed to resolve the Israeli-Palestinian conflict, which he said he had followed for almost 40 years.

He also reported that his country now hosts the Office of the Special Representative of the “Sustainable Energy for All” initiative, based at the UN’s Vienna Headquarters, and the newly established International Anti-Corruption Academy. In the last year, he said that Austria hosted the United Nations Alliance of Civilizations Global Forum and the King Abdullah Bin Abdulaziz International Centre for Interreligious and Intercultural Dialogue was inaugurated.

Speaking about the protection of human rights, he stated his support for the work of the Human Rights Council, saying as a member of the Council, Austria had contributed to efforts to protect journalists and religious minorities and the promotion of the rights of the child. He said violations of human rights based on sexual orientation or gender identity, as well as the use of the death penalty, were other areas of grave concern for Austria.

The slow progress towards nuclear disarmament was another area of grave concern for Austria, he said. “Nuclear weapons should be stigmatized, banned and eliminated.” He stated that recent events in North Korea had been particularly troubling, although he said he hoped that the Iranian nuclear issue would be resolved through negotiations. Speaking about his country’s commitment to the rule of law, he reported: “The Austrian Government is considering to set up an Austrian Rule of Law Trust Fund to support international actors in strengthening the rule of law and offer legal expertise or deploy legal experts free of charge to developing countries at their request.”