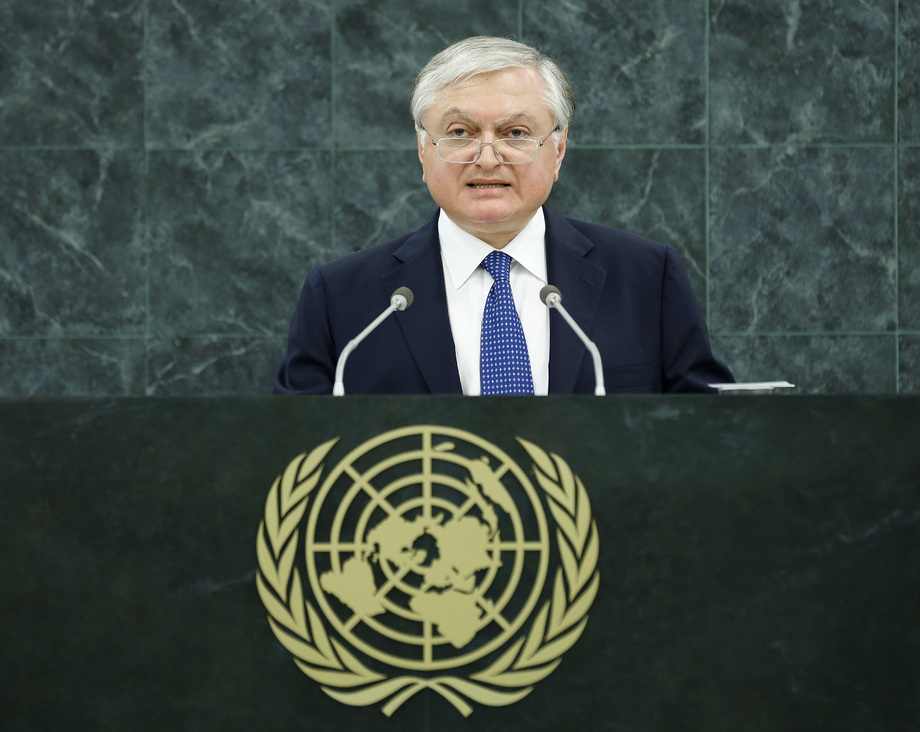 Edward Nalbandyan, Minister of Foreign Affairs of Armenia, said that the international community should to analyse its commitments with a view of the challenges that had arisen while implementing the Millennium Development Goals. The world financial crisis had significantly distracted States from the charted path, but it had also shown that no country could achieve the Goals in isolation. Peace seemed to remain elusive in many parts of the world, and his country was alarmed by the worsening humanitarian situation in Syria, whose citizens continued to flee to his country, already numbering more than 10,000. Plus, tens of thousands of Syrian-Armenians were still in Syria, after that country had become their second home following the genocide of 1915. They were struggling for survival. Armenia welcomed Security Council adoption of resolution 2118 (2013), and hoped it would lead to an end to the suffering of its people. More broadly, he said his country believed that there was “no alternative to peaceful solutions of conflicts”, which required political will and determination. On 18 June, the co-Chairs of the Minsk Group of the Organization for Security and Cooperation in Europe (OSCE) — France, Russian Federation and the United States — had made a statement on the Nagorno-Karabakh conflict. Armenia shared their position and agreed that “peoples should be prepared for peace not war”. Unfortunately, the Azerbaijani leadership was doing just the opposite, including through anti-Armenian speeches, thus seriously endangering the region’s security. Despite its participation in the Security Council, Azerbaijan was also disregarding Council resolutions relevant to the conflict. Armenia, however, would continue its efforts to seek a peaceful solution. In March, the Human Rights Council had adopted by consensus a resolution on the prevention of genocide, initiated by Armenia and co-sponsored by more than 60 countries, he recalled. The recognition, condemnation and prevention of genocide were a priority for his country, as it was a nation that had survived the first genocide of the twentieth century. Armenia also unequivocally welcomed the clear position adopted by United Nations Member States in precluding any possibility of immunity or pardon for perpetrators of crimes against humanity. In May, Armenia had assumed the Chairmanship of the Council of Europe. The cooperation between that Council and the United Nations was well-established in the fight against racism, xenophobia and intolerance, which was another high priority of his country’s agenda. Armenia supported United Nations reform as an opportunity to enhance the role of the Organization, he concluded.

The representative of Armenia described his Azerbaijan counterpart’s statement as based on lies, without even a single true statement included.  That was easy to do when there was no verification of the lies.  The people of Nagorno-Karabakh had expressed their right to self-determination in 1988, which had led to hostility and massacres.  The President of Azerbaijan had called Armenians enemies of Azerbaijan, which was xenophobic, he said, adding that Azerbaijani leaders spoke two languages — one promoting peace and one working for Armenia’s isolation.

The following <a href="http://gadebate.un.org/sites/default/files/gastatements/68/AM_en_reply.pdf">statement (PDF in English)</a> was made by the Representative of Armenia exercising his right of reply.

The representative of Armenia said the measure of Azerbaijan’s sincerity could be seen in its response to Organization for Security and Cooperation in Europe (OSCE) negotiations.  It was the most racist and xenophobic State, he said, questioning whether that was compatible with its Presidency of the Security Council.