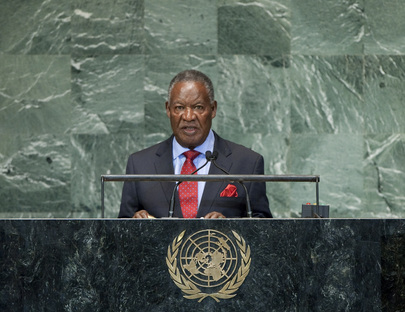 ELLEN JOHNSON-SIRLEAF, President of Liberia, said the theme of the present session could not have been more appropriate. “When we review the state of the world, we see an international landscape chequered by armed conflict, economic crises and environmental degradation.” For those who had experienced the pain of conflict, including Liberia, the theme was very pertinent. The need for conflict prevention took on an added urgency, because most conflicts were internal, engendered by marginalization, inequality and injustice. “It becomes imperative, therefore, to identify and remove those triggers of conflict before they explode,” she said. Liberia’s efforts to achieve the twin objectives of conflict prevention and peace consolidation were being reinforced through its engagement with the peacekeeping and peacebuilding architecture of the United Nations. It had prioritized actions aimed at re-establishing the rule of law by building the capacity of its institutions and processes for the delivery of justice and security. Liberia’s partners, including the United Nations and its specialized agencies, had supported its priority programmes for women’s empowerment, increased agricultural productivity and food security, road and infrastructure, and jobs creation, among others.

Many developing counties, such as Liberia, had structured their economies around the Millennium Development Goals. While some had made considerable progress in reaching those targets, many others would be unable to achieve them by the 2015 deadline. There was, therefore, an emerging consensus that such progress must be accelerated in the next three years. In that vein, she said that she was “honoured and humbled” to have been selected by the Secretary-General as one of the co-Chairs of the High-Level Panel of Eminent Persons on the Post-2015 Development Agenda. That framework must build upon, but go beyond, the Millennium Development Goals in the establishment of new goals that are “ambitious, but achievable”. “Defined goals should enable all people in all countries to be freed from the shackles of poverty through development that is sustainable,” she said.

Liberia believed that the United Nations should continue to occupy the centre of global governance by leading efforts in meeting the world’s collective challenges to peace, security and development. To meet that objective, the intergovernmental negotiations on Security Council reform needed to come to an early and logical conclusion, she stressed. Liberia was encouraged that an increasing number of countries supported the enlargement of the Council in both the permanent and non-permanent membership categories, which would ensure a fairer and more equitable participation reflective of the world demography. In that regard, Liberia supported the African Common Position, based upon the “Ezulwini Consensus” as adopted by the African Union.

Expressing her country’s deep condolences for the recent death of a United Sates Ambassador and staff, as well as of Libyan nationals, in an attack on the American consulate in Benghazi, she stressed that all nations should be concerned about the spreading violence in reaction to a film which demonstrated an “unacceptable insensitivity” to the Islamic faith. Even in such circumstances, however, “we must all be mindful that democracy requires freedom — freedom of ideas, freedom of association, freedom of religion, and, more importantly, freedom of expression”. Tolerance, and not violence, was an appropriate response to prevent further violence. Liberia itself was a clear example that, were in not for its tolerance to the new-found freedom of expression, the country would be back in chaos.

Noting that some parts of subregion were still regrettably dogged by serious challenges that risked undermining peace and progress, she said that Liberia was particularly appalled by the unconstitutional unravelling of democratic Governments in Mali and Guinea-Bissau and endorsed the decisions of the Economic Community of West African States (ECOWAS) aimed at the full restoration of constitutional order. Further, as chair of the Mano River Union, comprising Liberia, Sierra Leone, Guinea and Côte d’Ivoire, her country had committed itself never to allow an inch of its territory to be used to destabilize its neighbours and it categorically condemned all attempts to undermine the peace and democratic gains in Côte d’Ivoire. It was working closely with the Ivorian authorities and United Nations peacekeepers in both Liberia and Côte d’Ivoire to protect and consolidate peace in the two countries.

“We are all part of a rapidly changing world in which the forces of globalization cannot be reversed”, she said. Developing countries, like her own, must make globalization work if they were to achieve their growth targets and lift their people out of poverty. As Liberia moved towards its tenth year of sustained peace, it could state with conviction that it had “turned the corner”. The country was no longer a place of conflict, war and deprivation, but enjoyed an average annual growth rate of over 6 per cent. More importantly, it had earned its rightful place as a country of hope and opportunity, she said. She expressed thanks to the United Nations for being a committed partner, and added that today, for the first time in two generations, her country had a second successive democratic government elected by the will of the people and, despite external and internal distraction, “our people are determined to take their destiny in their own hands.”