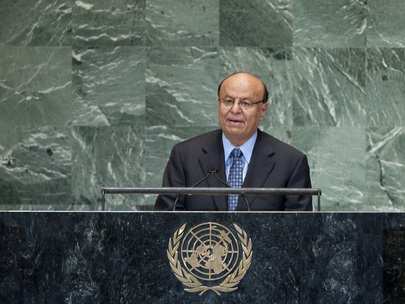 ABDRABUH MANSOUR HADI MANSOUR, President of Yemen, said in recent weeks there had been a wave of outrage in the Islamic world against a recent film that contained “explicit denigrations” of the Prophet Muhammad. It was deplorable that there had been a deliberate campaign of insults to Islam to taint its image and plant seeds of animosity. Despite that campaign, the behaviour had been justified as part of freedom of expression. Those people overlooked the fact that there should be limits to such freedom, especially if it was used to blaspheme the beliefs of nations. He strongly denounced the film, while also calling for an enhanced understanding between different religions and cultures, and for the adoption of international legislation to prevent further abuses of the right to freedom of expression. Denouncing violence and incitement, which was contradictory to true Islam, he called for adherence to peaceful expressions of opinion.

Heralding Yemen’s fiftieth anniversary of its 1962 revolution and its forty-ninth anniversary of its 1963 revolution, he noted his country’s peaceful transfer of power for the first time in its recent history. The “historical achievement”, he said, demonstrated his country’s determination to end an autocratic regime and establish a republican government with a constitution that represented a “new social contract between the State and its people”. As one of the “Arab Spring” countries, he lauded the disputing parties’ ability to reach an agreement and political settlement under the Gulf Cooperation Council Initiative, thus avoiding a “catastrophic” outcome. Early presidential elections were conducted, granting the new authority full legitimacy to fulfil the Initiative provisions and lead Yemen into a “brighter future” where its citizens could freely “choose their rulers”.

Continuing, he said that the National Dialogue Conference in Yemen that would tackle pending problems and concerns was open for all Yemeni parties and would be a means to achieve national reconciliation. Noting the current political arrangements, including the implementation of the settlement agreement and the Security Council resolutions 2014 (2011) and 2051 (2012), he pointed out that, although there were many political, economic, security and social obstacles facing his country, the Yemeni people would be undeterred in their efforts to join the twenty-first century. In that regard, it was necessary to adopt an “overarching vision” that would take into account the historical and geographical components of Yemen, including the strategic location of Yemen on trade routes and international sea navigation.

Terrorism, he noted, had pervaded his country for more than 10 years, threatening local, regional and international peace and stability. Regardless of the recent victories by Yemeni armed forces over Al-Qaida, he urged that the terrorist organization not be underestimated. He drew attention to the humanitarian crisis that resulted from terrorism in Sadah and the recent events of the past year that displaced more than 500,000 people from their homes, in addition to the increasing number of refugees from the Horn of Africa region. The United Nations appeal had asked for some $600 million, but it had been only about half funded. He called for support from “brotherly and friendly countries” to respond to the appeal so that the basic needs of displaced people and refugees could be addressed.

Concluding, he said that it was deplorable that six decades after the General Assembly issued the Universal Declaration of Human Rights, many nations still suffered human rights violations, such as the Palestinian people by the Israeli Government’s activities, the violence against thousands of civilians in Syria and the “racial cleansing” of Muslims in Myanmar. He congratulated the Somali people for their successful peaceful transfer of power and the election of a new president in a democratic environment, noting the “deep, historical relations” Yemen shared with Somalia. However, with the continued influx of migrants and asylum seekers from Somalia into his country, national security, peace and stability was threatened. He called for the international community to “share this burden” with Yemen, especially since his country’s own resources were “exhausted”.