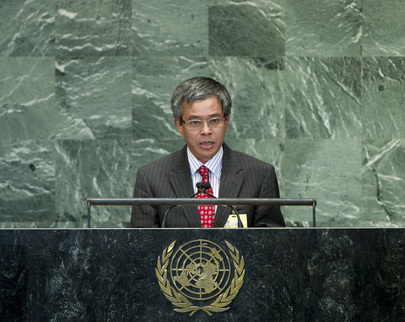 PHAM QUANG VINH, Vice Minister for Foreign Affairs of Viet Nam, said the current session’s theme was particularly relevant given the ongoing conflicts in various parts of the world, especially North Africa and the Middle East. Calling on the United Nations to continue its work in conflict resolution, peacekeeping, disarmament and nuclear non-proliferation, he also urged it to help revitalize the Conference on Disarmament. Stressing the importance of regional organizations, he said ASEAN continued to play a central role in promoting peace, stability and security, including maritime security in the South Asian Sea, and reaffirmed his country’s full support for ASEAN’s Six-Point Principles on the South China Sea.

The United Nations must strengthen global partnerships for development and lead an inclusive process to formulate the post-2015 global development agenda, he said, urging developed countries to fulfil their pledges to increase development assistance and support developing countries in capacity-building, given the current challenges of the global economy, the stalled Doha Development Round and persistent protectionism. Noting that 2012 marked his country’s thirty-fifth year as a United Nations Member State, he said it continued to pursue a growth model that linked economic development with social progress and environmental protection. In addressing recent global economic difficulties, Viet Nam had taken effective steps to maintain macroeconomic stability and ensure social security, he said. It had also continued to strengthen the rule of law and build a State “of the people, by the people, and for the people”, promoting their ownership and rights in all spheres.

In pursuit of a proactive international integration, he said, Viet Nam continued to contribute to the work of the United Nations, ASEAN, the Non-Aligned Movement and to the International Organization of la Francophonie (OIF). It also continued to make contributions to multilateral endeavours in addressing issues of nuclear security, weapons of mass destruction, disarmament, security and the Millennium Development Goals. Viet Nam had also implemented, with good results, the United Nations “Delivering as One” initiative. In addition, the country put forth its candidacy for membership of the Human Rights Council for the period 2014-2015, and looked forward to winning the support of Member States in that regard. Finally, he expressed his country’s support for United Nations reform, in particular, efforts to strengthen the Assembly, expand membership of the Security Council and reform the Council’s working methods.