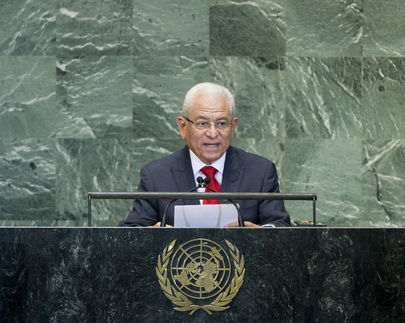 JORGE VALERO BRICEÑO ( Venezuela) said capitalism was in “deep crisis” and new imperialist projects were under way, as seen in attempts to eliminate social policies and eradicate jobs. Meanwhile, the Latin America and Caribbean region had managed to cope with the economic and financial turmoil relatively well, he said. It sought to bolster regional integration with a view to upending and routing the imperialist domination that had haunted it for so long. The Union of South American Nations and the Community of Latin American and Caribbean States, among others, were regional spaces for dialogue and ensuring that sovereign equality among States prevailed, he said, adding that they promoted social inclusion to overcome poverty. Diplomatic solidarity was winning the day in the region, even as imperial Powers continued to press States to give up their political independence and self-determination, he continued. Those Powers were implementing their new and aggressive interventionist agenda through the Security Council, making the need to revamp the United Nations all the more urgent. Indeed, international affairs could not be based on “privileges for a few”, he said, stressing in that regard that the General Assembly and the Economic and Social Council must not only be revitalized, but their decisions must be respected. He also called for a complete overhaul of the international financial system. Turning to Syria, he said “we are following the same interventionist script that was promoted in Libya,” adding that foreign Powers were trying to oust the current Government rather than resolve the crisis. “We are concerned by the warmongering and threats by Israel and the United States regarding Iran,” he said, turning to other situations in the Middle East. An attack on that country would have devastating implications for international peace and security, he warned. He went on to express support for all efforts to ensure an independent Palestinian State. Venezuela also denounced inflammatory language targeting certain religions and cultures, while at the same time reaffirming the inviolability of diplomatic premises. He also condemned the decades-long blockade against Cuba.