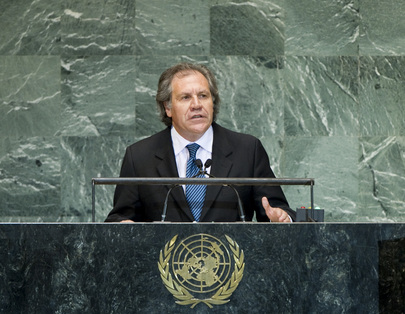 LUIS ALMAGRO, Minister for Foreign Affairs of Uruguay, welcoming this year’s focus on the rule of law, said that principle was embedded in the essence of the United Nations.  Respect for the rule of law was also at the heart of the social contract that sustained Uruguay’s democratic system, constituting a pillar of its foreign policy.  It was inseparable from the national way of life and from institutional, political and economic development, he said.  That had not come about through a foreign-imposed political model, but had evolved from a deep internal process that prioritized free coexistence among Uruguayans.  In respecting such principles, Uruguay rejected coercive unilateral or extraterritorial measures that contravened the United Nations Charter, he said, notably citing the embargo on Cuba.

Uruguay had always defended the right to self-determination as a key principle of coexistence among States, he said.  In that context, there must be a peaceful and mutually accepted solution to the question of Western Sahara, based on international law, General Assembly and Security Council resolutions and respect for the will of the Saharan people.  Indeed, Uruguay had been an early promoter of the peaceful settlement of disputes, notably at the 1907 Hague Conference, when it had tried to introduce compulsory international arbitration, he recalled.  Since then, international efforts to build a fair, balanced system had not come to fruition, he said, stressing the need for countries to learn how to build mechanisms for political dialogue so as to enhance democracy.

Eliminating differences did not solve political problems, he said.  Democracy, good governance and effective multilateralism were essential for sustainable development.  Noting that South America had faced threats with a major ideological component, he said recent events in Ecuador and Paraguay showed that, despite the desire for institutional systems, threats to democracy persisted.  On the protection of human rights, he said Uruguay had been a member of the Human Rights Council since that body’s creation in 2006, and currently held its presidency.  In that capacity it advocated a new culture of dialogue and the application of incremental special procedures before the imposition of coercive measures — a two-way cooperative model.  Strongly condemning human rights violations in Syria, he called for an immediate end to the violence and the beginning of dialogue towards a peaceful solution.