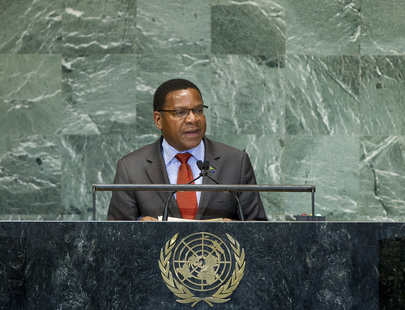 BERNARD KAMILLIUS MEMBE, Minister for Foreign Affairs and International Cooperation of the United Republic of Tanzania, said developing countries had fought hard to recover from the 2008 financial crisis, including through stimulus packages to expedite economic growth in areas like agriculture, the mainstay of his and other developing countries. While the global crisis was far from over, the international community had the opportunity to prevail over the turbulent waves by working together. His country had made progress in achieving the Millennium Development Goals. It had attained universal primary education in 2009; made considerable progress towards promoting gender equality and empowering women and towards combating HIV/AIDS, malaria and other diseases; and achieved moderate results in other goals. But, much work remained to emancipate people from the poverty trap. He proposed a second generation of Millennium Development Goals to ensure all those who had yet to achieve them did so in the post-2015 period and the international community should consider the proposed Sustainable Development Goals. The development needs of Africa should feature prominently in all consultations and decisions in multilateral forums.

While the 2012 Millennium Development Goals Task Force report was alarming in some respects, it offered some hope, he said. Therefore, it was necessary to recommit to fully implement the Millennium Development Goals after 2015 and the internationally agreed commitments on the special needs of Africa and the least developed countries. Since last year, the food insecurity situation had worsened and the vulnerability of many countries had increased. He called for collective action to address food insecurity and malnutrition, increase food production and productivity, strengthen agricultural systems, establish early warning mechanisms and develop effective responses to calamities in the Horn of Africa the Sahel region and elsewhere. The United Republic of Tanzania was a proud member of the Scaling Up Nutrition Movement. The Government had launched various food security initiatives through public-private partnerships. It had hosted the Africa Green Revolution Forum in Arusha, which concluded today. He welcomed the outcome document of the Rio+20 Conference, but said that outstanding issues required further consideration by the Assembly.

United Nations reform was long overdue, he said. Africa was the largest regional group in the Organization, but the only continent without a permanent Council seat. Moreover, most Council discussions were about Africa. African leaders had voiced agreement on the need for two permanent, veto-wielding seats for Africa, and to continue working together based on the Ezulwini Consensus and Sirte Declaration. He appealed to Africa to maintain its solidarity. His Government would continue to support the “delivering as one” initiative, which it had implemented with considerable success since 2007. The 2012 quadrennial comprehensive policy review would take into account those positive achievements.

He applauded the admission of Palestine to the United Nations Educational, Scientific and Cultural Organization (UNESCO). He appealed to big donors to UNESCO to review their decision to punish the agency by withdrawing funding, which hindered developing countries, particularly in Africa, which were the recipients of up to 65 per cent of UNESCO funds in education, science and culture. He called on the Secretary-General to continue his mediation efforts of bringing together the Moroccan Government and the leadership of Western Sahara to resolve their territorial dispute. He encouraged Morocco to rejoin the African Union, so together they could find a durable solution. Also, he stood in full solidarity with the Cuban people in their demand to end unilateral sanctions and embargoes against them.