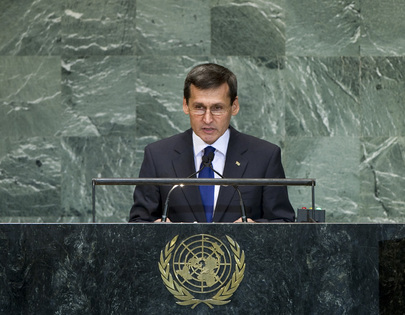 RASHID MEREDOV, Deputy Prime Minister and Minister for Foreign Affairs of Turkmenistan, said energy security was a basic condition for stable and conflict-free development. As a leading supplier of energy resources with the world’s fourth-largest hydrocarbon reserves, Turkmenistan, responsibly and consistently called for the establishment of a stable and reliable international energy supply system. There was a need to adopt consensus United Nations decisions which would serve as a basis for the creation of universal political and legal mechanisms governing global energy cooperation, he said, urging Member States to consider the creation of an international legal framework to govern the energy supply system, taking into due consideration the interests of hydrocarbon producers, as well as transit and recipient nations. As a first step, it would be appropriate to prepare, during the present session, a draft General Assembly resolution on the establishment of an expert group tasked with developing an appropriate multilateral document.

He said his country had announced its candidacy for membership of the Economic and Social Council for 2013-2015. The decision was based on current political, socio-economic and cultural realities, as well as on the nation’s active role in international processes, and its understanding of the responsibilities inherent in membership of that Council. Turkmenistan intended to use all available means to improve international cooperation for the effective implementation of sustainable development goals, he said. The most important element of modern international relations was cooperation in the humanitarian sphere, he said, proposing that the United Nations include international humanitarian issues as a separate item on its agenda. Turkmenistan proposed the development of a United Nations platform of action for humanitarian affairs, designed to form the political and legal basis for consolidating the international community’s efforts in that field. Such a holistic approach would help stimulate the activities of the relevant United Nations agencies and develop long-term solutions, in line with international law and General Assembly resolutions, while ensuring implementation of United Nations conventions in the humanitarian sphere, he said.