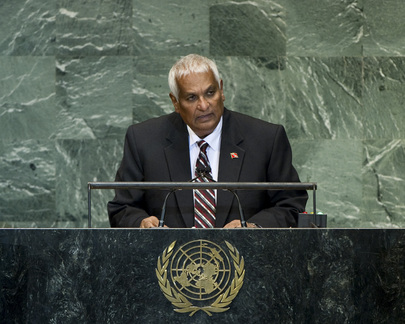 WINSTON DOOKERAN, Minister for Foreign Affairs of Trinidad and Tobago, said that there had been a redistribution of wealth and the very nature of global power was shifting. New dynamics were emerging as the world witnessed the growing economies of Latin America, Asia and Africa. Quoting the President of the Assembly’s own statement to the Assembly just days earlier, he said that “a growing number of States are determined to enhance their external engagement, aspiring to play greater roles in their respective regions and beyond”. As a result, power and influence was becoming more diffuse in the international arena. In decades of engagement, his country had accepted its responsibility and the core of its commitment had been the rule of law. “Too often, we had witnessed the severity of the consequences when States act unilaterally to solve disputes through the illegal use of force.” In that respect, Trinidad and Tobago called on all nations to ratify the amendments to the Rome Statute of the International Criminal Court on the crime of aggression; Trinidad and Tobago expected to ratify those amendments by the next Assembly of States Parties.

The United Nations was the principle vehicle for facilitating the settlement of disputes or situations among States by peaceful means. However, while the architecture was in place to achieve that objective, there was nonetheless a need to strengthen it. To achieve that noble goal the political commitment of Member States, whether large or small, developed or developing, was necessary. Member States must move with haste to reform the Security Council. It was a matter of grave concern to his country that the Council had not been able to effectively address the situation in Syria. “The Council must uphold its sacred mandate under the Charter and ensure that all sides involved in that conflict are made accountable for their actions, which have caused tremendous human suffering and continue to threaten international peace and security”, he said. The United Nations must also commit all available resources to mediating a two-State agreement to begin to resolve the Israeli-Palestinian situation, in full accordance with relevant resolutions reaffirming borders existing before 1967. In addition, the completion of Cuba’s reintegration, as a full and equal partner, into the international system was an issue close to the Caribbean; the economic blockade of that island was an “anachronism”, he stressed in that respect, calling once again for its removal.

While Trinidad and Tobago would have preferred a more equitable geographic representation on the Secretary-General’s Panel on the acceleration of efforts to achieve targets set by the Millennium Development Goals, it nonetheless welcomed its establishment, and called for “fresh and bold changes and a paradigm shift” in thinking in the design of the post-2015 development agenda. In that regard, he said, the international community must move decisively to fully implement its obligations under the United Nations Framework Convention on Climate Change (UNFCCC) and its Kyoto Protocol.

With regard to arms control, he said that Trinidad and Tobago deeply regretted the failure of the United Nations Diplomatic Conference on the Arms Trade Treaty, despite the support of an overwhelming majority. He joined in calls for the resumption of that Arms Trade Treaty by the first quarter of 2013, and added that Trinidad and Tobago had recently hosted a high-level discussion on the topic “Women, disarmament, non-proliferation and arms control”. He asked all Member States to support that resolution when it came before the General Assembly this session. In addition, he joined in calling on the major international lending agencies to recognize the special circumstances of middle-income countries, and not to push them “to the margins of the development agenda”.