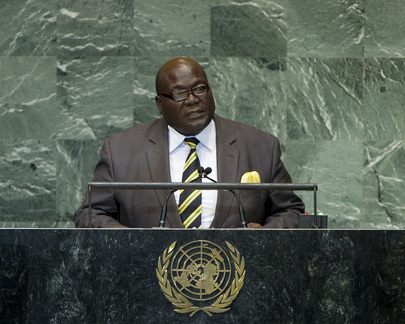 ELLIOTT OHIN, Minister of State, Foreign Affairs and Cooperation of Togo, said that, in an increasingly complex world, the Assembly’s theme allowed Member States to reconnect with the original and founding values of the United Nations. The Organization had long taken it upon itself to address the multiple challenges of a constantly changing world. However, in spite of those efforts and some successes achieved, the use of force continued to emerge too frequently in international relations. In many cases, recourse to force was chosen too quickly, cutting short the process of peaceful negotiations. Indeed, he said it was time to put the “dialogue among nations” back at the centre of the international agenda. “But today we need to go further, and make dialogue within nations an indispensible corollary to the international dialogue”, he added. The world today was marked by interconnectedness, and it was rare for an internal conflict not to have repercussions on its neighbours, he said, pointing, as one example, to the current conflict in the Sahel region.

Encouraging dialogue within nations meant, above all, adopting a constructive attitude that promoted international values and took into account local and regional specificities. With that in mind, the West African Economic and Monetary Union, which enjoyed observer status in the General Assembly and over which Togo presided, had decided to give heightened priority to the issue of peace and security. That new choice for an economic organization was guided by the need to make dialogue a priority tool for conflict prevention, he said. In that regard, he affirmed that the decentralization of the settlement of conflicts was one of the most viable options to make the prevention of conflict last throughout the world. However, he stressed, the increased accountability of subregional organizations should not be a means for Member States to renounce collective responsibility in the area of peace and security. “As Members of the United Nations, we do not have a choice” in that matter, he said.

The establishment of a Peace and Security Council within the African Union in 2002 hade created much hope, he went on. That new tool allowed the Union to directly intervene in countries in crisis. However, in the recent cases of Libya and Côte d’Ivoire, it had been demonstrated that, faced with antagonism, organizations had not been able to “fill in the gaps” with that tool. It was, therefore, necessary to enhance cooperation between such new regional mechanisms and those international instruments that had been active for decades. He asked the international community to mobilize to support Mali in re-establishing its territorial integrity and regaining peace. Recent events in the northern part of the Africa continent had once again emphasized the reality that the main responsibility in the settlement of disputes must be borne individually by States.

Togo, which had a non-permanent seat on the Security Council, was resolutely committed to finding peace through dialogue and negotiations. Welcoming the efforts of the United Nations and all friendly partners and countries who had helped Togo move forward and accept the path of dialogue, and to overcome its past, he said that Togo had renewed its economic growth and was in the process of intensifying sweeping institutional reforms, as well as moving forward with a republican agenda. Togo needed to further strengthen its economy and push the country forward to new successes, in particular in the social domain, where there were many current challenges. Its immediate priority was the holding of peaceful, free and transparent elections. “We should leave no stone unturned” in the struggle to avoid allowing elections to become synonymous with violence and chaos, he stressed. Turning, finally, to the much-needed reform of the Security Council — which was demonstrated by that body’s inability to agree on certain major matters — he reaffirmed Togo’s support for the African Union initiative which sought to grant the African continent more adequate representation within the Council. It was up to the permanent members to “take a small step which would allow all of humanity to take a great leap forward”, he said.