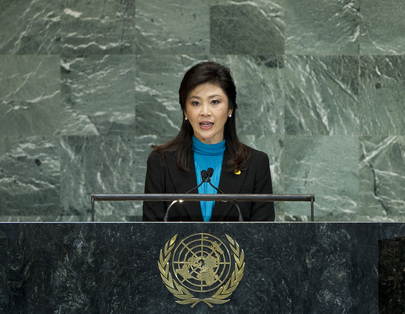 YINGLUCK SHINAWATRA, Prime Minister of Thailand, said economic development must go hand in hand with political advancement, emphasizing three points. First, an inclusive national development strategy was vital. It was important to place people at the front and centre of the development agenda, while sustainable growth and development, poverty reduction, addressing climate change and environmental challenges, and promoting greater employment must also go together. Second, an inclusive regional development would strengthen regional peace and security. In South-east Asia, that was the spirit that was driving 10 members of ASEAN to establish an ASEAN Community by the year 2015. As it moved towards greater integration, efforts were being made to close development gaps and expand connectivity across the region and beyond, into the wider East Asia and South Asia. “That could help spread the fruits of development and growth wider across the continent,” she said. Third, an inclusive global process was crucial as the international community considered the post-2015 development agenda, she continued. With the 2015 deadline for the Millennium Development Goal fast approaching, the international community should mobilize an all-out effort to make the final push towards realizing those targets, she stressed. At the same time, it was important to prepare for the post-2015 era. The successes and failures of the Millennium Development Goals should be taken into account as the Sustainable Development Goals were elaborated. “We live in a world of increasing inter-connectivity, but our peoples continue to face insecurity from cross-border challenges,” she said. In the age of globalization, the concept of security must be people-centred. Therefore, transnational challenges — from people-smuggling to human trafficking, from narcotics to pandemics, from natural disasters to illegal trade in arms and weapons of mass destruction materials — must rank high on national agendas, she said, urging the international community to redouble its collective efforts to act forcefully against transnational crimes. There was no doubt that human trafficking was one of the worst forms of human indignity. Bangladesh was fully committed to eliminating such inhumane exploitation. However, whether it was human trafficking or other transnational crimes, she said, the key was to ensure that the rule of law prevailed and that people’s basic rights were guaranteed, especially those of vulnerable groups, such as women, children, the elderly and persons with disabilities. Solutions to those challenges could not be achieved by Governments alone. Efforts were needed on the part of all stakeholders, especially in strengthening international norms and standards. Through the United Nations, “we need to promote the rule of law as a solid foundation to achieve peace, international security, human rights and sustainable development”, she said.