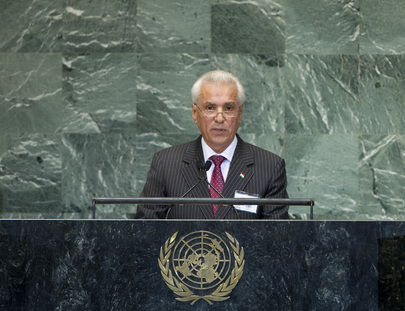 HAMROKHON ZARIFI, Minister for Foreign Affairs of Tajikistan, said it was impossible to address global and regional issues without strengthening the United Nations central role in international affairs.  There was a clear need to reform the Organization, efforts that would allow it to emerge capable of quickly responding to developments and effectively meeting the threats of a new generation.  Its peacebuilding activities, in particular, required comprehensive support.  Stressing that respect for cultural and religious diversity was essential for global peace, he voiced deep concern at efforts to denigrate religions, particularly Islam, by “misusing the freedom of expression”.

Recalling that the International Security Assistance Force (ISAF) was to withdraw from Afghanistan in 2014, he said the “Afghan theme” would take on exclusive importance for the region and the world, as its development was key for ensuring peace.  Assistance should focus on its economic rehabilitation, with the building of railroads, motorways, power transmission lines and gas pipelines connecting Afghanistan with Tajikistan, and other countries, of utmost importance.  Tajikistan had proposed projects to enhance regional cooperation and believed that the multidimensional regional cooperation processes should fully involve Afghanistan.

Preventing illicit drug trafficking was one vital area where cooperative efforts were needed, he said, underlining the need to integrate national efforts into the international drug control strategy.  For its part, Tajikistan’s anti-narcotics strategy included short- and long-term programmes for cooperation on bilateral, regional and multilateral bases.  The Government also was committed to fully implementing the Convention on the Prohibition of the Use, Stockpiling, Production and Transfer of Anti-Personnel Mines and on their Destruction.

As for sustainable development, he said energy access was the key to achieving the Millennium Development Goals, especially for developing countries and remote mountain territories like Tajikistan.  He regretted that, due to a lack of regional cooperation and the disregard for his country’s legitimate rights, Tajikistan had experienced severe power shortages during the winter over the last 10 years.  It was vital for his country to develop hydropower and, according to international Tajikistan treaties, it had all the rights to use its resources in that regard.  It had no intention of pursuing its interests at anyone’s expense and advocated mutually beneficial regional cooperation.  But it also expected that, during the implementation of the assessment for the Roghun hydropower station, parties would abstain from hasty actions that contravened international accords.

He went on to say that Tajikistan’s lack of access to the sea hampered its sustainable development, making unimpeded transport and communication arteries connecting it to its neighbours vitally important.  He called for eliminating all artificial barriers in that regard, voicing hope that the relevant United Nations missions in the region would focus on that issue.  In closing, he said the International Year of Water Cooperation, in 2013, had been initiated by Tajikistan and a number of events had been proposed, including a General Assembly thematic session on the topic.