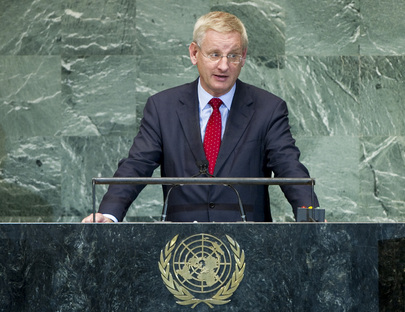 CARL BILDT, Minister for Foreign Affairs of Sweden, recalled a time when computers had barely been invented and the Internet had been decades away. Today there was instant access to the global information network, and more connected devices than there were people, he said, while stressing that “connectivity carries risks”. An odious film clip posted on YouTube had led to outrage and deadly violence 10,000 miles away. However, the opportunities of connectivity were vastly more important than the risks, he said, citing the positive impact of more open societies, more contact, and more trade as a result of global advances in technology and connectivity.

Concerning the ongoing violence in Syria, he stressed the need to prevent the risk of sectarian fragmentation across the region, and called upon the Security Council to put its global responsibilities above narrow national interests. “Violence is easy to start, but difficult to stop,” he noted. Urging the Assad regime, in the strongest possible terms, to stop killing its own people and start respecting its obligations as a Member of the United Nations, he said there was no alternative to a political solution. As a direct consequence of the crisis, more than 2.5 million people were in need of humanitarian support, over a million had been displaced and there were a quarter of a million refugees in the region. The regime must grant unhindered access to the displaced and the suffering, he emphasized, adding that Sweden, as one of the world’s largest donors, had contributed massively to humanitarian efforts.

The protection and promotion of human rights was one of the international community’s central duties, he continued. Critical to those efforts were gender equality and the empowerment of women “because it’s right, because it’s smart and because it’s fundamental to realizing the economic and political potential of societies”. In that regard, Sweden was one of the largest financial contributors to the work of the Office of the United Nations High Commissioner for Human Rights, and was a candidate for the Human Rights Council for the period 2013-2015, he said. Emphasizing the need for the human rights arena also to adjust to the world of connectivity, he said his country would take every opportunity to champion online freedom of expression, the immense development potential vested in the Internet and new communications technology.

He went on to underscore the need for inclusive, equitable and sustainable development, stressing that the Rio+20 agenda should move forward and involve scientists and business in order to explore the potential of information and communications technology. As for climate change, he said the Arctic region was warming twice as fast as the global average, and that the Arctic Sea’s ice cover had receded so much that it had reached a new historic minimum. Pointing out that there was less ice this autumn than ever before in recorded history, he called for progress in climate change negotiations and effective implementation of globally agreed outcomes. As the current Chair of the Arctic Council, Sweden would reduce emissions and increase growth to move towards a truly sustainable future, while making use of technology, he said.