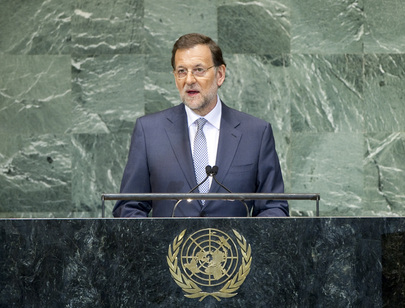 MARIANO RAJOY BREY, Prime Minister of Spain, said his country wished to serve on the Security Council in 2015-2016, noting that its experience in making the difficult but successful transition to democracy could be useful to all Arab countries currently in a similar situation. In the process of building open, inclusive societies, there was no room for movements that promoted violence, he said. In 2011, Spain had worked to find solutions to crises in the Horn of Africa, especially in Somalia, he recalled. Its cooperation in the fight against piracy in the Indian Ocean was greater than ever, and during Spain’s recent presidency of the Contact Group on piracy off the Somali coast, progress in creating an international response and humanitarian efforts had led to improvements in the region.

He went on to say that four months ago, Spain had signed an agreement with the World Food Programme (WFP) to create the world’s largest food storage facility in the Canary Islands, which would allow faster, more efficient delivery of emergency food aid in Africa. By contributing resources, infrastructure and personnel, Spain had helped Afghanistan move towards stability, and would continue to help that country achieve development and security. Spain had also committed to the Millennium Development Goals since their inception, having donated almost $1 billion through the Spain-United Nations Development Programme (UNDP) Millennium Development Goals Achievement Fund, the largest donation to a cooperation programme in the country’s history.

Emphasizing the valuable and increasing role of Latin America in developing the multilateral system, he said his country would host the 2012 Ibero-American Summit in Cadiz. He reiterated his appeal for an end to all violence in Syria and called upon that country’s President to allow a political process that would enable a peaceful resolution of the conflict. Lebanon had managed to stay out of the spiral of violence in Syria, thanks in part to support from the United Nations Interim Force in Lebanon (UNIFIL), in which Spain was an active participant, he noted. Spain supported a two-State solution to the Israeli-Palestinian conflict, he stressed, adding that the global community must have the courage to take the necessary steps to ensure a just, durable peace in response to the yearnings of both sides.

Noting that he would participate in Wednesday’s Sahel Summit at Headquarters, he firmly condemned the violence in northern Mali and expressed support for the efforts of the United Nations, the African Union and ECOWAS to find a solution. He also reiterated his appeal to Iran to ensure compliance with the resolutions set forth by the E3+3 Group in relation to its nuclear-enrichment activities without delay, and to ratify and adhere to the Additional Protocol to the Comprehensive Safeguard Agreement with the IAEA. Spain also supported the Six-Party Talks, he said, adding that the Democratic People’s Republic of Korea must end its nuclear military activities in a complete and verifiable way.

Spain’s desire to serve on the Council again reflected its conviction that it could continue to play an active role in finding joint solutions to common problems thorough its demonstrated commitment to multilateralism, he said. It would continue contributing to peacekeeping operations, providing troops through the United Nations support base in Quart de Poblet. He called for reactivating the Conference on Disarmament and renewing the Assembly’s mandate to advance negotiations on an arms trade treaty. Spain would continue to support negotiations on a comprehensive convention on international terrorism, he said, recalling that his country had hosted a high-level conference on victims of terrorism in Madrid last July.

A firm defender of peaceful solutions to conflict, he said that Spain, together with Morocco, would present an initiative to promote mediation and develop national and local capacities in the Mediterranean, in line with Assembly resolution 65/283, the Secretary-General’s work and that of the Group of Friends of Mediation. Spain actively supported a just, lasting and mutually acceptable political solution to the dispute over Western Sahara, he said, adding that as a member of the Group of Friends, his country firmly supported the work of the Secretary-General, his Personal Envoy and the United Nations Mission for the Referendum in Western Sahara (MINURSO). He also called upon the United Kingdom to renew its bilateral dialogue with Spain over the decolonization of Gibraltar, in line with United Nations parameters.