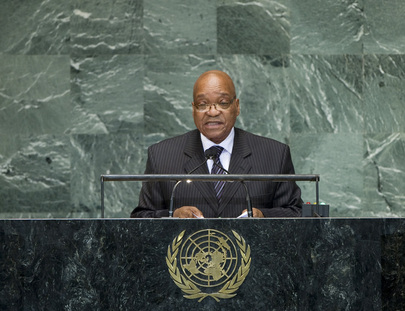 JACOB ZUMA, President of South Africa, said the United Nations faced immense pressure to address the unprecedented loss of life in Africa and the Middle East. It was concerning when the Organization appeared unable to act or assist, paralysed in certain instances due to inaction on the part of some Member States, and when a divided Council was unable to muster the collective courage to say “no more” to warring parties in the interest of peace. That illustrated the need to continue and deepen United Nations reform to make the world body agile and nimble in addressing contemporary challenges, he said. Given its mandate, the Council must be legitimate, democratic and transparent, he emphasized.

Calling for more meaningful representation of Africa in that body, he noted that issues affecting the continent accounted for 70 per cent of its agenda. It must be expanded in both membership categories, with at least two permanent seats and five non-permanent ones for Africa. The United Nations should also appreciate fully the role of regional organizations in managing and resolving conflict, he said, urging closer cooperation between the Organization and African Union peace and security mechanisms. He recalled that in January, during its presidency of the Council, South Africa had piloted resolution 2033 (2012), on cooperation between the United Nations and regional and subregional organizations in maintaining international peace and security. Through its High-level Implementation Panel on Sudan, the African Union continued to address one of the continent’s longest-running conflicts, he pointed out.

In order to settle disputes peacefully, the Council should carry out its Charter mandate within the confines of international law. All Member States and international bodies should be held to account so as to avoid abuse of the “Responsibility to Protect” and the protection of civilians, he said, stressing, however, that such principles must not be used to justify regime change. Debate on those principles must continue in order to develop norms and standards of accountability, he said, emphasizing also that the United Nations must maintain its impartiality and not be dragged into taking sides in a conflict under the guise of civilian protection.

Turning to the Middle East, he expressed concern about the Palestine-Israeli conflict, saying his country remained committed to a two-State solution based on the 1967 borders, and fully supported Palestine’s application for United Nations membership. It was unacceptable that Palestine remained outside the Organization, he said, calling for the matter to be concluded soon in a positive way. As for Iran, he noted that the Director General of IAEA had concluded that all declared material in that country was for peaceful purposes, and encouraged Iran to continue cooperating with the Agency. South Africa supported the long-standing call for a nuclear-weapon-free Middle East, and a peaceful resolution of issues relating to Iran’s nuclear programme was important in that regard. He reiterated South Africa’s continuing support for the self-determination of the people of Western Sahara, as well as for lifting the embargo against Cuba.

He urged the United Nations to continue promoting the Millennium Development Goals and instruments meant to advance women’s human rights. Expressing concern that sub-Saharan Africa would likely not meet the targets, he called for expediting their implementation in the next three years, and appealed to donors not to renege on their commitments to help Africa attain the Goals. Noting that racism and racial discrimination remained an affront to the founding principles of the United Nations, he called for renewing the global commitment to building on the solid foundation laid by the Durban Declaration and Action Plan. Additionally, Member States must ensure implementation of the agreements reached during the Conference of Parties on climate change, held in South Africa last December, he said, emphasizing that the Durban Platform offered an opportunity to move forward in that regard.