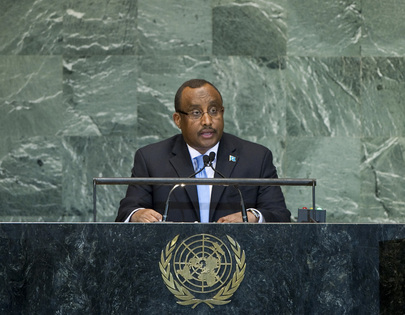 ABDIWELI MOHAMED ALI, Prime Minister of Somalia, said that just over two weeks ago, his country had taken a bold and decisive step away from decades of division, disorder and conflict, towards the reconstitution of a more representative, more democratic Somali republic at peace with itself, its neighbours and the rest of the world. Over more than two decades of crisis, the Somali people had suffered and endured, but they had not done so alone. “The United Nations have stood by us, providing humanitarian assistance to those of our people in need, helping us to rebuild from the ruins of war, bringing us time and again to the negotiating table to resolve our differences, and maintaining the dignity of the Somali nation by keeping our flag flying though these long, dark years.”

Paying tribute to all those involved in bringing that about, including Secretary-General Ban Ki-moon and his Special Representative, he acknowledged that his country’s progress was also due in great measure to the selfless courage and sacrifice of African Union member States. With support from AMISOM and other partners, Somalia’s Armed Forces were becoming increasingly experienced and capable. But the country would need AMISOM’s steadfast presence and mentoring for some time to come, he acknowledged, calling upon the African Union to renew its commitment as the country moved towards full resumption of its responsibilities.

Members of the League of Arab States and the Organization of Islamic Cooperation had also extended their support during Somalia’s difficult times, he said, adding that he was especially grateful to the Government and people of Turkey for their “courage and leadership” in ending Somalia’s long isolation. The end of Somalia’s transition had come about through the immense efforts of the Transitional Federal Government, Somali regional administrations, civil society and traditional leaders, he noted, pointing out that, against all odds, Somalis were able to adopt a new provisional constitution, create a new Parliament and elect a new President within one year, heralding the beginning of a new era. The country’s transition had officially ended, but the work of rebuilding the nation continued, he said, noting that the new Administration had four short years to translate paper agreements and objectives into concrete, tangible progress, while placing Somalia firmly on an irreversible path to enduring peace and growing prosperity.

The most urgent challenge was restoring peace and security throughout Somali territory, he declared, emphasizing that power and responsibility must be devolved as close to the people as possible, in accordance with the principles of federalism. The new Administration had repeatedly extended olive branches to its adversaries and, although they had been repeatedly rejected, the new President would continue to reach out and offer peace. To Al-Shabaab, a complex and heterogeneous movement whose members were mostly ordinary citizens who had aligned themselves with the group out of fear or a sense of grievance, he said the new Government would continue to say, as it had done in the past: “Brothers and sisters, lay down your arms and let us talk.” To those “few ideological extremists” in the group’s ranks who remained committed to terror and the murder of innocents to achieve their aims, there was no place in Somalia or the international society for them and their violent creed.

As Somalia moved away from transitional government into an era of permanent government, it was necessary to establish a new compact for national coexistence in which the aspirations of all Somalis would be reflected, he stressed. The durability of national stabilization efforts would depend largely on Somalia’s ability to revive and develop the economy. Recognizing that the country’s problems had spilled far beyond its borders, he said foreign countries had taken in hundreds of thousands of Somalis fleeing the crisis at home, at considerable sacrifice to their own citizens, while Somali pirates had become the scourge of shipping far from their country’s shores. Furthermore, extremists from across the world had used Somali territory as a base from which to plan and launch attacks against foreign countries. Therefore, as Somalia reclaimed its status as a full member of the international community, it must acknowledge its responsibility as a nation, both for the proliferation of those problems and for their eventual resolution, he said.