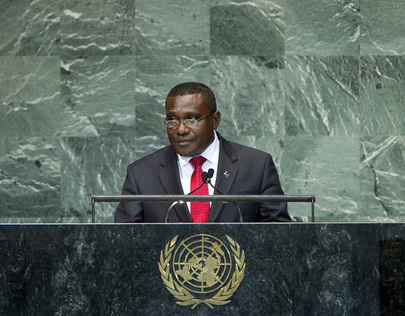 GORDON DARCY LILO, Prime Minister of the Solomon Islands, said new cold war lines were being drawn and low-intensity territorial disputes were brewing in the Asia-Pacific region, and demanded effective multilateral institutions to respond meaningfully by upholding the rule of law. Recalling that his country had emerged from an internal conflict some 10 years ago, he said some socio-economic progress had been made since the restoration of stability, with steady economic growth in the past five years, external reserves increasing, recognition by the World Bank for improved ease of doing business and efforts to buffer the economy from shocks. In addition, malaria had been eradicated from two provinces, infant and maternal mortality had decreased significantly and health centres were being funded. There had also been a reduction in major crime and a safer environment had been created. The Islands had hosted a number of international events in sports, arts and politics. “We have regained our image of the country known as the ‘Happy Isles’,” he said, pointing out that the Government was working with partners to ensure a smooth transition from the Regional Assistance Mission to the Solomon Islands.

Welcoming ongoing intergovernmental processes to strengthen human-rights treaty bodies, he said double standards and the politicization of human rights must be eliminated. The Solomon Islands supported a major United Nations role in resolving all situations of conflict in the Middle East, including advancing a two-State solution to the Israeli-Palestinian dispute. He expressed deep concern over the recent sad events in Benghazi. He expressed support for New Caledonia’s aspirations to self-determination and encouraged all efforts to enable its indigenous Kanak people to assume leadership in determining their own future. He also joined regional neighbours in supporting the re-inscription of French Polynesia on the United Nations decolonization list. Welcoming Assembly efforts to smooth the transition process for countries graduating from the least-developed category, he said his own country was pursuing high-value investments in that regard and taking steps to maximize returns from natural resources.

Reiterating the urgent need to deal with climate change as an irreversible threat to humanity, he said mitigation must be prioritized at meaningful levels, and called for determined efforts to ensure temperatures did not rise by more than 1.5˚ Celsius, in order to ensure the survival and viability of small island developing States and least developed countries. He expressed deep regret that some countries had opted out of the Kyoto Protocol, while others stalled on a second commitment. On the other hand, the Solomon Islands had launched its national climate change policy, which was mainstreamed into all sectors. It was also looking to ensure that its rich diversity was on the global agenda. Finally, he called for Security Council reform, international engagement with Taiwan and the lifting of the embargo against Cuba.