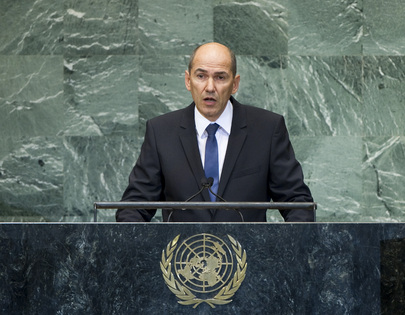 JANEZ JANŠA, Prime Minister of Slovenia, recalling the Assembly’s theme on peaceful dispute settlement, drew attention to “horrific scenes” in Syria, where a civil war had dragged on for months. Mediation had failed. “It shocks our conscience that we have been unable to stop bloodshed,” he said. The situation was critical. It spoke to the urgent need to enhance the preventive capacities of the United Nations and regional organizations. Efforts to avert mass atrocities were needed. He reminded the Assembly that last year marked the sixtieth anniversary of the entry into force of the Convention on the Prevention and Punishment of the Crime of Genocide, the result of tireless efforts by Raphael Lemkin, a Polish lawyer, who stalked the halls each day until the Assembly finally adopted it in December 1948. The world had waited half a century to see the first conviction of a person for the crime of genocide. The establishment of the International Criminal Tribunals for the former Yugoslavia and for Rwanda, and later, the International Criminal Court, were milestones in the humanization of international relations. Further, the United Nations had improved its coordination of genocide prevention activities, he said, but he regretted that common understanding on the modalities of the responsibility to protect had not been reached, and he urged strengthening both focus and dialogue to that end. In the years since World War II, more than 80 countries had experienced mass atrocities that led to 53 million innocent lives lost. Behind those numbers were families who were still traumatized and societies with distorted creative potential. “We should be able to set basic limits to human behaviour and stop mass atrocities,” he said. With that in mind, he recommended that a new strategy be developed to prevent genocide and other mass atrocities that would see an intergovernmental forum of like-minded countries propose a resolution setting a clear mandate for the adoption of an appropriate legal mechanism. That entity would give the concept of the responsibility to protect new tools by enforcing crime prevention and enabling a more rapid, effective response to such abuses. Slovenia stood ready to start a dialogue and would convene the first meeting in the coming months. The initiative originated from international civil society, he said, adding that the Institute for Cultural Diplomacy in Berlin had attracted thousands of supporters from among international non-governmental organizations, lawyers, students, journalists and other individuals. It was not “just one lonely initiative”; there were many others across the globe. States also should enhance their collaboration to prosecute alleged perpetrators of genocide and mass atrocities, he said, urging that a culture of prevention be created that would see a better understanding of the warning signs that would trigger early action. Condemning violence against diplomatic missions, he said the freedom of speech was fundamental in democracy and that only through strengthened intercultural dialogue could the potential for conflict be diminished. Each and every nation had an enormous duty — and opportunity — to prevent atrocities. “We do not want the mistakes of yesterday to be repeated tomorrow,” he said, inviting the Assembly to join Slovenia’s efforts towards a world free of genocide.