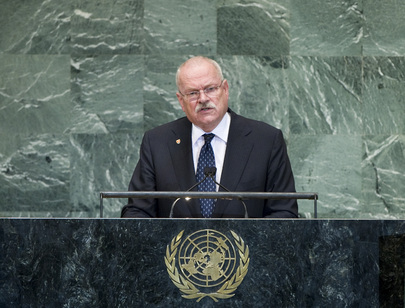 IVAN GAŠPAROVIČ, President of Slovakia, called for global partnership and cooperation, strong multilateralism and a United Nations capable of effectively combining its political, economic, military, social, civil, trade and development dimensions. The world needed an Organization that people could trust. Condemning as unacceptable the recent attacks against diplomats and diplomatic missions, he said such violence could never be a means to resolve disputes. Open dialogue, respect for mutual differences and the joint search for peaceful solutions was the only way to go, he said, adding that mediation under United Nations auspices was the key to resolving conflicts. Unfair distribution of wealth, social imbalances, poverty and a sense of injustice bred conflicts and disputes, while prevention was the most effective tool for ensuring peace, a dignified life and sustainable growth.

It was crucial to remove the primary causes of conflict, including through poverty reduction, sustainable development, respect for human rights and the rule of law, as well as democratic institutions and arms control, he said. The United Nations must be adequately empowered to use its potential to help Member States in those areas. The strongest economies must be stable and aware of their responsibility to help achieve global development and social stability around the world. The international community must, therefore, pursue the common goal of transforming the United Nations into an effective institution with a leading role in a new global environment and a clear vision on adapting to the demands of the twenty-first century. The world body had the tools needed to end poverty and ensure sustainable development for all, he said. At a time of fiscal constraints, existing tools must be used more effectively, and there was no need to create new parallel or duplicate structures.

Expressing support for the Secretary-General’s “Sustainable Energy for All” initiative, he stressed the positive aspects of using nuclear energy in the energy and health-care sectors. Priority investment in research to increase the operational safety and security of nuclear power plants was more useful than massive investment in closing functioning power plants. Slovakia was prepared to cooperate with other partners to make the United Nations more effective, he said, expressing support for strengthening the Economic and Social Council and making it work more effectively with the Assembly and other actors of the United Nations system. Slovakia also took seriously its moral duty to help developing countries and countries in distress, he said, adding that, despite its tight budget, his country had increased its official development assistance (ODA) this year.

Slovakia also advocated a comprehensive, universal and binding arms trade treaty, he said, adding that further negotiations would lead to consensus on an effective agreement. Applauding the convening of the upcoming Helsinki conference on nuclear weapons and other weapons of mass destruction, he said its successful conclusion would support efforts to end concerns over Iran’s nuclear programme, he said. However, Iran’s rocket testing did not contribute to a belief in the peaceful nature of its nuclear programme. Slovakia supported strengthening cooperation between the United Nations and the European Union and the North Atlantic Treaty Organization (NATO) to manage crises. There was also a need for greater cooperation among the Organization’s peacekeeping missions, better protection of civilians through security-sector reform, and for better strategies to move from peacekeeping to peacebuilding.

Afghanistan remained a top foreign military priority for Slovakia, which would keep its troops in that country as long as necessary, he said. It was one of the top three recipients of Slovakia’s ODA, he said, adding that his country also supported the central role of the United Nations Assistance Mission in Afghanistan (UNAMA) in building capacity and stability. Wherever in the world human lives were at risk, the international community should be prepared to take resolute action, he said, expressing his deepest regret over the thousands of victims in Syria, and joining previous speakers in requesting the International Criminal Court to investigate the most serious crimes committed in that country.