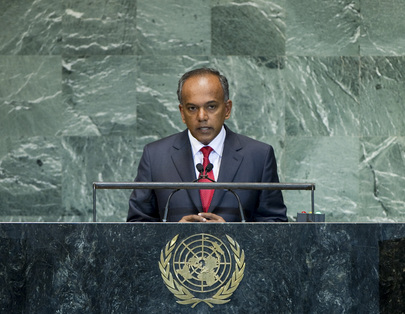 K. SHANMUGAM, Minister for Foreign Affairs and Law of Singapore, noted the uncertainty in the global economic situation, the diverse political pressures on national policies that led to protectionism and short-term thinking, saying “the multiplicity of interests makes finding consensus in international fora that much harder”.  As a result, countries had begun to turn for solutions to smaller, more exclusive groups outside the multilateral framework of the United Nations.  The G-20, for example, had been able to deal with some of the most pressing macroeconomic problems and had been instrumental in keeping the 2008 financial crisis from becoming a global depression.  It left out the vast majority of United Nations Member States, but the Global Governance Group had been established to strengthen engagement with them.

Even with the rise in importance of the G-20 and other such groupings, however, he said, it was important to strengthen existing multilateral institutions in order to achieve greater efficiency than the smaller groups could provide.  As frustrations mounted over the world body’s limitations, including the Security Council’s inability to act on Syria, “let us not forget that the UN and its organs, including the Security Council, can only do what its members choose to do”, he cautioned.  “The UN is an organization of sovereign States and has no more authority than its Members give it.  Any failure of the Security Council and the UN in maintaining peace and security represents a failure of the Member States themselves,” he declared.

“We should, therefore, support ongoing and new efforts aimed at strengthening the UN, instead of denigrating it”, he continued, pointing out the Organization’s unique ability to come up with global solutions due to its universal membership, legitimacy, experience and presence on the ground.  Efforts that should be supported included the significant expansion of United Nations mediation capabilities, as well as its good offices and peacekeeping efforts, which were necessary for mediation and the peaceful settlements of disputes.  Regarding the Security Council, he said his country had consistently called for an improvement in its working methods so as to ensure that power was “visibly and openly wielded to the greater good” and that its legitimacy was not undermined.  The long-term goal should be an effective system of international law and resilient mechanisms for peaceful dispute settlement, he said.

That required dialogue among Member States, he continued, adding that respect for the rule of law was critical in that regard.  Without it, “small States will lose their independence and autonomy and even the larger and stronger States can never feel entirely secure”, he said.  “Small States such as Singapore are vulnerable even at the best of times,” he added.  It was, therefore, important that small States actively support and participate in mechanisms for the maintenance of international rule of law, he stressed, noting that Singapore had used the International Court of Justice and the International Tribunal for the Law of the Sea to resolve disputes and speak up against violations.  The upcoming high-level conference of the Forum of Small States would address those commitments.