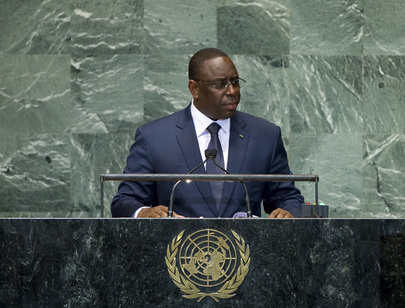 MACKY SALL, President of Senegal, said organized and heavily armed terrorist groups had illegally occupied two thirds of neighbouring Mali, sowing despair among the population and destroying World Cultural Heritage sites. Northern Mali had become a lawless area, a safe haven for the recruitment and training of international terrorists, who wrongly used Islam as a pretext to disguise their criminal activities and sought to attack foreign interests, as well as reach other parts of the world. He called on the Security Council to end the occupation, authorize action against the terrorist groups, and restore Mali’s territorial integrity, “otherwise the Security Council will not have lived up to its responsibilities”.

Opposed to any partition of Mali, he also condemned the 22 March 2012 military coup and stressed that “in Africa as elsewhere, the place of the army is in the barracks, under the command of a civilian authority”. Turning to the situation in Guinea-Bissau, another neighbouring country, he expressed appreciation for the efforts of the transitional Government to effect national reconciliation, re-establish institutions, organize credible elections and withdraw the army from the political arena. Faced with faithless and lawless foreign drug traffickers, Guinea-Bissau deserved the attention and support of the international community, he stressed.

Speaking as Chair of the Committee on the Exercise of the Inalienable Rights of the Palestinian People, he restated that body’s support for the creation of a viable and independent Palestinian State with East Jerusalem as its capital, saying that “is one of our oldest promises we have not yet fulfilled”. In the interest of all peoples of the region and the world, “it is high time that the Holy Land of the three revealed religions no longer be a land of fire, blood and tears, because the light of wisdom emanating from its spiritual calling makes it instead a land of peace and human fraternity”.

Describing a “paradox of modern times”, he said “never before in human history had the world accumulated so much wealth, but never before in human history has the world counted so many poor”. What kind of world did people want “when it is a proven fact that continuous environmental degradation as a result of human action threatens to jeopardize living conditions on earth”? According to Food and Agriculture Organization (FAO) estimates, more than 900 million people suffered undernourishment when agriculture had the potential to feed more than twice the planet’s population, he noted.

Meanwhile, millions of human beings in Africa’s towns and villages had no access to basic social services and millions of women died in childbirth, he said. At the same time, millions of young people, after years of studies, efforts and sacrifices, only found, instead of accomplished dreams, the nightmare of unemployment and indignation as an outlet for their distress. Millions of workers, fathers and mothers earning the minimum wage, suddenly found themselves out of work because their companies had gone bankrupt and the people responsible had gotten off scot-free with a “golden parachute” as compensation.

Stressing the need to redefine priorities, invest in the economy and agree on a new and fairer world order, he declared: “The African continent, which has endured centuries of slavery and exploitation, cannot afford to […] give over its resources in a competition that would push it further to the margins of progress and well-being,” he said, calling for another way of relating to Africa, one based on a more equitable partnership and which took into account the priorities and interests of all, not only at the United Nations, but also in NEPAD, the Group of Eight (G-8), the G-20 and other forums. Senegal, for its part, would focus on agriculture, infrastructure and energy to ensure a path of progress and improve the lives of its citizens, he said.