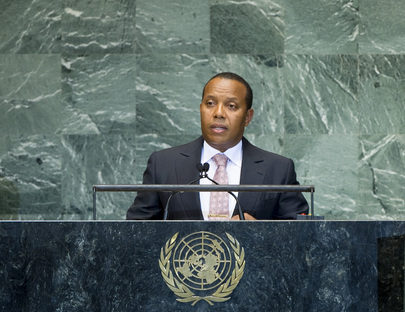 PATRICE EMERY TROVOADA, Prime Minister of Sao Tome and Principe, reiterated his hope that the United Nations would play a key role in mediating conflicts, even though the Organization continued to suffer from “roadblocks” that prevent urgent decisions from being taken in time, thus allowing impunity for leaders who made martyrs of their own people, paving the way for more international disorder, despair and injustice. Suffering in Syria, Mali, Afghanistan and many other places was prolonged because of that inaction, he said, stressing that the disintegration of national territories must be prevented, and the degrading situations of peoples in oppressive situations remedied.

He said the international community should bring both firmness and dedication to bear in Guinea-Bissau, with which his country maintained strong links, in order to find a credible, inclusive and lasting solution while ensuring that coups did not recur. Applauding international efforts in Mali and the Democratic Republic of Congo, he called on States bordering those two countries to establish more effective cooperation with them, based on trust and mutually beneficial interests. Citing progress in the Horn of Africa, he hailed the accomplishments of the African Union Mission in Somalia (AMISOM). He also welcomed the progress made towards resolving the dispute between Sudan and South Sudan, as well as the Secretary-General’s recommendations on Western Sahara.

On other conflict situations around the world, he expressed solidarity for victims, including the families of diplomats, journalists, members of non-governmental organizations and peacekeepers who had been killed. The Palestinian people must have their State, the embargo against Cuba must end, Iran and other countries must enjoy their right to nuclear technology, while abiding scrupulously by their obligations in that regard, and polluters must pay for their pollution, he said. Sao Tome and Principe also supported ongoing initiatives aimed at allowing Taiwan to make a significant contribution to international issues alongside peaceful efforts to normalize its relations with China.

Transnational crimes, including piracy and trafficking in arms and drugs, were of great concern to countries with long coastlines such as his own, he said, applauding recent Security Council actions on piracy in the Gulf of Guinea. As for the global financial crisis, he said it had severe effects on every aspect of life in small countries like Sao Tome and Principe, including the business climate and political stability. Measures were needed to jump-start economies through productive investments, and people all over the world were demanding changes in the rules and practices of the international financial system so as to make stakeholders and speculators more accountable.

Domestically, Sao Tome and Principe was carrying out institutional reforms aimed at reducing poverty and increasing transparency in public management, he said, reporting good progress in meeting the Millennium Development Goals relating to education and health, in particular the fight against malaria. In order to meet all the Millennium Goals, the country hoped to continue receiving international support in many forms, he said, thanking UNESCO and the entire international community for having recognized Principe as a World Biosphere Reserve.