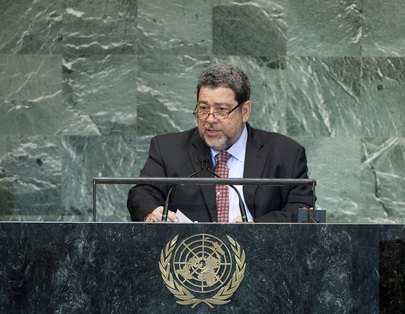 RALPH E. GONSALVES, Prime Minster of Saint Vincent and the Grenadines, said that last year’s debate had not been without hope and optimism, as Member States had anticipated meaningful progress at the United Nations Conference on Sustainable Development — “Rio+20” — and had predicted a robust and legally binding arms trade treaty. They had embraced popular home-grown calls for political change and scanned the horizon for encouraging signs of recovery and growth. Today, however, “global optimism, though still enduringly present, is in scarcer supply, as the international community has encountered the challenges of a new world and found itself wanting”. Global structures, including the United Nations, were faced with changes of a scope, scale and rapidity that substantially outpaced their ability to react, and demanded a level of courage not sufficiently matched by political will.

In the Caribbean region, the global economic and financial meltdown continued to be felt most acutely by the poor, the youth, the elderly and the vulnerable, who bore no responsibility for the rampant financial speculation and unregulated movement of capital that had spurred the crisis. Today, four years into an externally imposed meltdown, which had produced negative or marginal growth across the Caribbean, the region was forced to contemplate the implications of a potential “lost decade” of development. “Our citizens, who have struggled nobly under the weight of externally sourced contraction, austerity and hardship, are not possessed with limitless patience or endurance,” he said. Their hard-won developmental gains were in jeopardy and their political stability in potential peril.

In both global economics and politics, he went on, the “ancien régime” was passing. A transition was at large, but immense challenges arose with it. Among those, he asked, would the transition be manageable, or must it be played out in a chaotic manner? How could it be managed in the most efficacious way, and in whose interest? Was the transition a dead end, and if not, what was its destination? It was a truism that men and women made history not in circumstances of their own choosing, but in those which they inherited. Yet, each people possessed their own history, with its own legitimacy. Unfortunately, the power of some to define things globally distorted those elemental truths. “It is well known that the lion's view of history does not coincide with that of the gazelle or the lamb; the elephant and the ant do not see things eye to eye.” But, human beings possess the capacity to go beyond those limitations of the animal kingdom and that was fundamentally why States have gathered together under the United Nations Charter. Its uplifting and magnificent ideals and purposes constitute the best hope for the human race. “Arrogant and unbridled power, from whatever source, is thus to be contained.”

In the Latin American and Caribbean region, developmental and political partnerships increasingly reflected a strengthened spirit of regional integration and greater South-South cooperation, he said. After centuries of colonial conquest, settlement and exploitation, the deepening bonds of friendship among States of the region were a fundamental manifestation of their independence and political maturity. The strength and genuine cohesion of those growing regional integration initiatives was built on a solid foundation of shared experiences and common values. The members of the Organisation of Eastern Caribbean States (OECS) and the Caribbean Community (CARICOM) were bastions of good governance, democracy and the rule of law, and they shared those experiences and aspirations with the country’s South and Central American sister States, which had also established unshakable foundations of democracy and good governance after fitful periods of political unrest and foreign interference in the past.

However, his country, its region and the world faced other “existential challenges”. Saint Vincent and the Grenadines was angered by the inexcusable failure of States to move decisively towards a meaningful and legally binding climate change treaty. “Entire nations that currently occupy this Assembly, whose representatives sit among us as friends and equals, may simply cease to exist as a result of our inaction and political cowardice,” he stressed in that respect. Other nations, including his own, were already victim to increasingly intense and frequent storms, hurricanes and other weather events. “These changes threaten not only our way of life, but risk reversing our recent developmental progress,” he said.

The islands of the planet were at war against climate change, warming temperatures and rising seas. That was not a future event, but instead a present-day and ongoing battle. “As all of you in this Assembly are aware, it is a war that we are currently losing.” The survival of their islands were at stake, and the responsibility for immediate change lay indisputably with those whose reckless pollution over generations had led the world to the brink of catastrophe. “We shall fight the rising seas and encroaching oceans and defend our islands’ right to exist at any cost,” he said, calling on all nations to join them in the fight — for it was one which could still be won.