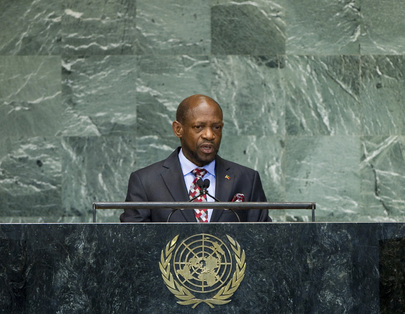 DENZIL L. DOUGLAS, Prime Minister of Saint Kitts and Nevis, welcomed the theme of the peaceful settlement of disputes, and said the complexities and challenges facing Libya and Syria, to name just two, underscore the fact that “social upheaval and human trauma anywhere must indeed concern us all”. The Security Council must continue to ensure that it executes its mandate to enable the institutionalization of a culture of peace and security, with respect for democracy and diversity underlying such efforts. In that light, he condemned the recent attack on the United States embassy in Libya. Grateful to be able to call his country stable and socially cohesive, he expressed deep appreciation to the United States for its support, in the form of the Caribbean Basin Security Initiative against drugs and criminality. Reform had become critical to ensure that youth embraced productive work and a hopeful vision through respect for human life.

However, the continuing flow of small arms into the region and their threat to life and stability still concerned him greatly and he urged agreement on an arms trade treaty and the establishment of a dedicated secretariat to assist States parties in implementing it. His small country, located between “regions of massive drug production and regions of massive drug consumption”, with the related threat of arms inflows, was simply not equipped to deal with the “externally created crime fallout”. The presence of the United Nations Office on Drugs and Crime (UNODC) had been withdrawn, leaving it to adjust the best it could, at precisely the time when such crime continued to be a major hemispheric challenge.

Describing his country’s efforts to implement a plan of action on non-communicable diseases, he urged that the Assembly move forward on a campaign to curb the global toll of such illness, in light of its effect on development. On HIV/AIDs, he said that the ultimate objective must be eradication of the dreaded disease. He appealed for a wise, determined and discerning onslaught against it at all levels, as well as a recommitment to eradicate stigmatization and discrimination against people living with it.

Turning to climate change, he said, “It is troubling that the largest contributors of greenhouse gasses are still not taking responsibility for the increasing temperatures, rising sea levels, coastal degradation, coral reef bleaching and decimation, infrastructural damage and loss of lives that their actions have wrought,” adding that: “The physical, mental and financial burden that other countries’ energy usage has inflicted on countries like mine has been enormous — plunging us deeper into debt and severely frustrating our efforts to meet our Millennium Development Goals.” He strongly urged that green energy be made an absolute priority globally, and he welcomed the Secretary-General’s initiatives and the assistance of Taiwan and other partners in that regard.

Noting the framework developed at Rio+20 in that regard, he said that “If we are to even approach the potential of Rio+20, it will be essential that we first face up to, and then break, the strictures of indifference and narrow self-interest that have plagued us for far too long.” He applauded, in that light, the decision to convene the third United Nations conference on sustainable development for small island developing States in 2014, and urged that clear targets be developed now for reducing the extreme vulnerabilities of such States. In addition to other problems created abroad, those States had also gone through economic hardships because of the financial crisis that was not of their making and his country had to restructure and work with a raft of partners to alleviate its severity. Finally, he stressed the importance of rule of law at the international level and urged that strictures on Taiwan’s international status be removed and that the embargo against Cuba be lifted, in light of the contributions that both had made to the international community.