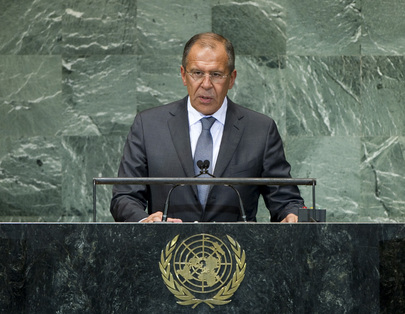 SERGEY V. LAVROV, Minister for Foreign Affairs of the Russian Federation, said the Middle East and North Africa had been a “nerve knot” of global politics, with the deep changes sweeping the region intertwining with key problems of modern international relations.  A comprehensive approach that rejected ideology-driven patterns and double standards was needed, he said, adding that his Government supported people’s aspirations to determine their own destiny and pave the way for more effective governance models.  All countries should be interested in making the region stable and democratic, but outside players had made no progress in reaching unanimity on ways to achieve that goal.

Turning to Syria, he said his country’s consistent calls to compel the Government and its opponents immediately to end the violence and elaborate a compromise on the pace of reforms was the substance of the Action Group’s Geneva communiqué.  The Russian Government had proposed that the Security Council adopt a resolution endorsing the communiqué as the basis for negotiations at the start of a transition period, but it had been blocked amid insistence that only the Government cease hostilities, while extremists, including Al-Qaida grew more active.  Condemning violence from whatever origin, he called for practical steps, starting with a comprehensive ceasefire, the release of prisoners and hostages, and the supply of humanitarian aid.  “This will create conditions to start an inter-Syrian dialogue,” he said.

Elsewhere, a just and durable Arab-Israeli settlement envisaging an independent, viable Palestinian State coexisting in peace and security with Israel would significantly help normalize the region, he said.  Expressing support for Arab League efforts to advance the Arab Peace Initiative, he also urged participation in the 2012 Conference on Establishing a Middle East zone free of weapons of mass destruction and their means of delivery.  The Russian Federation also supported closer ties between the United Nations and regional organizations, he said, emphasizing, however, that all actions should be based on the United Nations Charter, which contained nothing providing for the right to pursue regime change.

Indeed, the world order was threatened by the arbitrary interpretation of essential principles, he said, citing non-use or threat of force, peaceful settlement of disputes, sovereignty, territorial integrity and non-interference in internal affairs.  Decisions on sanctions must be taken with the understanding that they should not lead to isolation, but to dialogue.  Urging the Council to resume discussions on the humanitarian limits of such measures, he said unilateral sanctions undermined international efforts.  Such issues were linked to the responsibility to protect, he said, noting that discussion of that concept should be held on the basis of approaches agreed upon at the 2005 World Summit, which had reaffirmed the need to observe Charter principles in responding to intra-State conflicts.  The concept’s ambiguity could be better understood in the context of Brazil’s initiative, he said.

On a final note, he voiced concern over the actions of those who glorified Nazis in the name of freedom of speech and desecrated the memory of Second World War victims.  The International Covenant on Civil and Political Rights prohibited war propaganda and incitement of national and religious discord, he noted, recalling that yesterday, the Human Rights Council had endorsed a Russian-initiated resolution on the interrelation between human rights and traditional values.  Regrettably, several Western States had voted against it, he noted.