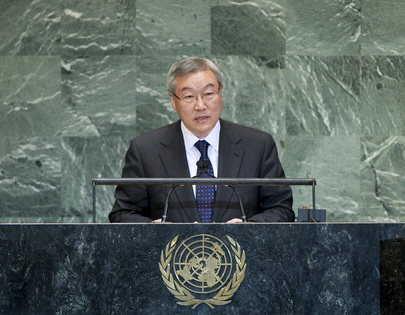 KIM SUNG-HWAN, Minister for Foreign Affairs and Trade of the Republic of Korea, expressed confidence that the international community would overcome such challenges as climate change, poverty, disease, underdevelopment, terrorism and proliferation of weapons of mass destruction. The United Nations, “the symbol of our collective wisdom”, should, however, take greater responsibility in coping with them, he said, expressing support for the Secretary-General’s “Five-Year Action Agenda”.

Describing the outcome of the Rio+20 Conference as a substantial advance for sustainable development, he said great efforts must now be made in follow-up actions such as developing sustainable development goals, strengthening institutional frameworks and mobilizing finance. As part of those endeavours, the Republic of Korea had established the Global Green Growth Institute, he said, adding that 16 countries had signed the agreement on its establishment on the margins of the Rio Conference. Its launch was set for next month. The Republic of Korea was also prepared to host the Secretariat of the Green Climate Fund and to render support for that initiative, he said.

He said his country continued to increase its official development assistance in support of internationally agreed development goals. Domestic experience had taught that investing in education lay at the heart of effective development, he said, expressing strong support for the Secretary-General’s Education First initiative. The Republic of Korea also contributed to discussions to shape the post-2015 development framework, recognizing the importance of a comprehensive approach that took into account the economic, social and environmental dimensions of sustainable development.

Turning to peace and security, he affirmed that his Government would stand by the Syrian people though their time of suffering, placing high hopes on the efforts of Joint Special Representative Lakhdar Brahimi. The recent attacks on diplomats and diplomatic premises could not be justified, regardless of the motivations, he said. Urging all Member States to work for an end to violence against women in conflict situations, he said they should take protective measures, provide effective remedies and reparations for victims, and end impunity.

Respect for territorial integrity and national sovereignty was the guiding principle of stable international relations, he said, stressing that no country should abuse international legal procedures to infringe upon those principles. In addition, he described his country’s efforts to combat nuclear proliferation and nuclear terrorism, adding that emerging threats in cyberspace also presented a serious challenge. By hosting the 2013 Conference on Cyberspace, the Republic of Korea hoped to contribute in multiple ways to maximizing digital networks and helping to pool international efforts to combat threats arising from the misuse of communications technology.

Regarding the Democratic People’s Republic of Korea’s nuclear programme, he called on that country to take concrete measures towards denuclearization, and to heed the international community’s call for improvement in its human rights situation. As a country that had risen from the ashes of war, the Republic of Korea had learned the values of peace and security, he said, expressing its hopes of serving as a non-permanent member of the Security Council for the 2013-2014 period.