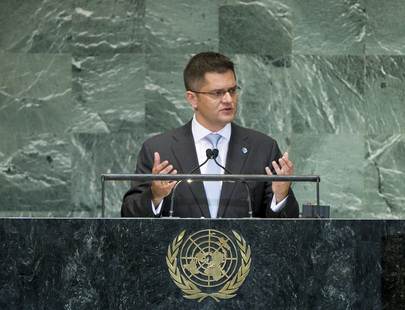 The President of the General Assembly, VUK JEREMIĆ of Serbia, said like many other nations his country had travelled through periods of tragedy and glory.  At the close of the twentieth century, a founding member of the United Nations, it had descended into internal strife, with fratricide leaving deep wounds.  “A painful era has now come to an end,” he said, noting that today, Serbia stood with confidence before the international community again.  It did so to advance the common interest of mankind, and was dedicated to shaping a world in which peace might triumph and international law prevail.

The General Assembly was the chief deliberative policy making body, he said; a grand “pantheon of hope” for the peoples of the world.  The United Nations Charter had been written so all would adhere to the same rules.  Its purpose was clear:  to set up, for the first time, a workable international system that aspired to justice and ensured equal rights and equal dignity to all States.

The geopolitical landscape of today was unlike any that had been seen, he said; one of truly global interdependence. The international system was growing more volatile and a number of variables in the global equation required heightened attention.  Across the board, States were aspiring to greater roles in their regions and beyond.  As a result, virtually no ones’ position was the same today as a generation ago, making consensus more difficult to reach.  Capabilities once thought to be exclusively in State hands, like inflicting harm on a massive scale, had grown more accessible to non-State actors.  “We must find a way to act in concert, so that the legitimate needs and concerns of Member States can be met,” he said.

In addition, there was the quest for empowerment, he said, noting that whatever their grievances, people around the world sought more say in shaping their destinies, a scenario perhaps most visible in the Middle East.  There were concerns, however, that the Arab Spring had generated unintended consequences, among them, ethnic and tribal tensions, many of which had been long-suppressed.  The legacy of the noble quest for empowerment in the Middle East hinged on how those and other dangers were tackled.  Given the region’s global political and economic significance, events would have far-reaching implications for the world.

He went on to say that rarely had it been more necessary for the world to draw closer together, and it was critical to reinforce universal adherence to rules that were implemented without partiality.  Selective enforcement could quickly erode the basis for trust.  Such a scenario was clearly not in the United Nations interest and it was essential that efforts reinforced respect for State sovereignty and territorial integrity.

He noted that the United Nations Charter enjoined disputing parties to first seek a solution by, inter alia, negotiation, mediation, arbitration, and judicial settlement, and with that in mind, he had proposed the theme on the peaceful settlement of disputes.  However, peace was not merely the absence of war; it required the reconciliation of those who were at odds.  Only in that way could lasting peace be achieved.  A solution to an international problem could be achieved only by renouncing unilateralism, and only when parties committed to settlement.  In such efforts, the Assembly could be a “moral guarantor” of what had been agreed. He looked forward to hearing proposals on how better to use existing mechanisms for peaceful dispute settlement and for revitalizing the Assembly.

Outlining his priorities, he said he would launch efforts to harness the expertise of institutes and think tanks.  A formal advisory panel would provide him with guidance on the myriad issues to be considered by the Assembly, including a post-2015 development agenda.  He would encourage the process to develop sustainable development goals, and establish a process to propose options for effectively financing them.  Moving forward, more emphasis must be placed on economic growth, job creation, and the production of green goods and services in a more equitable trading environment.

Moreover, sovereign equality would lose its meaning if it was understood as a political principle, downplaying its economic dimension, he said, pressing the Assembly to participate more actively in advancing the global economic governance agenda.  No country could lift itself out of poverty if had no right to have its voice heard.  He would convene a high-level informal meeting aimed at enhancing collaboration among the Assembly, international financial institutions and the Group of Twenty (G-20).  The Alliance of Civilizations was also underused, and guided by the Assembly, could help the world expunge problems of the past.

In sum, he said the United Nations would be as strong as Member States chose to make it.  Citing Ralph Waldo Emerson, he said:  “an institution is the lengthened shadow of man”.  From the ancients to our own times, generations had endeavoured to advance the noble cause of peaceful dispute settlement.  The culmination of those efforts was the United Nations Charter, “our surest guide in this time of consequence”.  He urged delegates to find a tenacity of purpose and the courage to master the challenges ahead, saying if they worked with faith and common purpose, the Assembly could go down in history as an “Assembly of peace”.