H.E. Mr. Vuk Jeremić, President of the 68th Session of the General Assembly 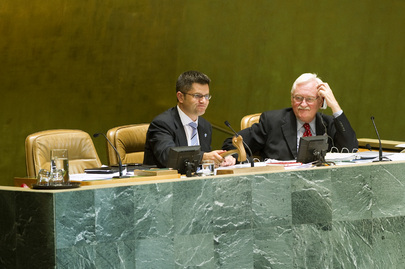 Addressing the close of the United Nations General Assembly's high-level debate today, the Assembly's President, Vuk Jeremic, underscored that “as has been the case since its founding, this Organization will only be as strong as the membership chooses to make it.”

“Let us now dedicate ourselves to the hard work ahead, which begins in earnest as early as tomorrow. Let us try to be more transparent and efficient in how we conduct our affairs, making the best use of our time and resources to advance common objectives,” Mr. Jeremic told the 67th Assembly's General Debate, at UN Headquarters in New York.

“Let us engage with a readiness to compromise and try hard to strengthen trust in each other – and in so doing, help to fulfil the hopes and aspirations of the 193 Member States of the United Nations,” he added.

Established in 1945 and providing a forum for multilateral discussion of the full spectrum of international issues covered by the UN Charter, the General Assembly occupies a central position as the world body's chief deliberative, policy-making and representative organ.

More than 100 Heads of State or Government and over 70 ministerial-level officials addressed the 67th General Debate, which began last Tuesday, and for which the chosen over-arching theme was 'bringing about adjustment of settlement of international disputes or situations by peace means.'

“Over the past week, we have heard thoughtful and constructive interventions on this critical topic,” Mr. Jeremic said. “This catalyzed fruitful discourse in the plenary and at numerous side events, in turn stimulating many bilateral discussions.”

In his remarks, the General Assembly President noted the various thematic topics that had been brought up for discussion by the representatives of various countries, These included establishing respect for the rule of law, the sovereignty and territorial integrity of UN Member States, sustainable development, global economic governance, the proliferation of nuclear weapons, terrorism, equal rights and opportunities for women, human trafficking, the illicit trade in small arms, indigenous people's rights, UN peacekeeping, intercultural dialogue and the need for the revitalization of the United Nations, including reform of the Security Council.

Among the specific issues of concern that were brought up at the General Debate, Mr. Jeremic cited the crisis in Syria, development needs in Africa, progress in Somalia and stability in Africa's Great Lakes region, amongst others.

“In reviewing the many statements that have been made, I have been struck by how much common ground exists on a wide range of issues. Obviously, significant differences of opinion remain to be overcome,” the Assembly's President said. “Nevertheless, I believe there is room for optimism.”

He added that intends to continue consultations with UN Member States, the Assembly's Main Committees, and regional as well as informal groups, on the proposed programme of work for the Assembly's 67th session.