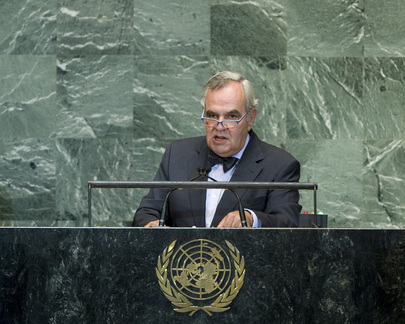 JOSÉ FILIPE MORAES CABRAL ( Portugal) said his delegation was three months away from concluding its tenure on the Security Council. It had fulfilled its mandate with rigour and transparency, and had always sought to reinforce the Council’s credibility and efficiency. Portugal had reaffirmed the primacy of international law, defended human rights, and worked in pursuit of broader multilateralism, as well as the protection of children and other civilians. Sustainable development, the fight against poverty, food security and the devastating effects of climate change on small island developing States also remained fundamental to its actions within the United Nations. “With equal perseverance, we sought to strengthen the role of the Security Council in the fight against new challenges to international peace and security, such as organized crime, the proliferation of illicit trafficking, terrorism and pandemics,” he said, adding that his delegation had also sought to bolster the body’s capacity to prevent conflicts and employ mediation.

He said Portugal had played a key role in tackling current peace and security challenges, including in Guinea-Bissau and Syria, where there “is no alternative other than a political solution”. Such a solution must seek to ensure the legitimate aspirations of the Syrian people and allow for a citizen-driven democratic transition. On other matters, he said there would be no peace in the Middle East without a lasting solution to the Palestinian question. While Portugal understood Israel’s legitimate security aspirations, it also understood and shared the frustration of the Palestinians, for whom an independent State “is a straightforward question of justice”.

Turning to Africa, he said it was imperative to restore constitutional order in Guinea-Bissau, which would require the nomination of a Government that included the Partido Africano da Independência da Guiné e Cabo Verde, currently held majority party in the National Assembly. Any and all solutions would have to respect international legality and constitutional order, as well as translate into internal, inclusive and credible political processes, he stressed. Finally, he highlighted the success story of Timor-Leste, noting that the United Nations mission in that country was set to conclude its mandate at the end of the year. A new cycle of cooperation between Timor-Leste and the international community was now open, in line with the priorities set by the Timorese Government. In that context, Portugal would continue to support the country on its path to economic and social development, strengthening its institutions and democratic values, as well as the rule of law and the promotion and protection of human rights.