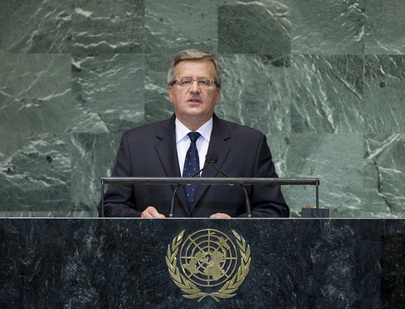 BRONISŁAW KOMOROWSKI, President of Poland, said that the weakness of international institutions in addressing the economic, security, humanitarian or environmental problems was “indisputable”, noting the Security Council’s response to the conflict in Syria, and international financial institutions’ inability to handle the recent events in the financial markets. The Iranian nuclear program was cause for concern, as was the proliferation of weapons of mass destructions and an intensified arms race among the Gulf States. The results from the mission in Afghanistan were a lesson on the “shortcoming” of the strategy of “military first”, which was not a suitable method for resolving difficult internal conflicts.

Despite the hopes raised by the Arab Spring, he went on to say, the civil war in Syria and the inability to contain it “cast a shadow all across the region”, as did other recent events, such as the tragic death of United States diplomats. Although there were many examples of the successful peaceful settlement of disputes, including efforts made by Jimmy Carter and Martti Ahtisaari, without the “crucially important factor” of compromise, it would not be possible to arrive at a lasting solution. In his country, the Solidarity and the Round Table talks in 1989 illustrated a compromise that, although not fully satisfactory to either of the two parties, had opened up “perspectives for further change” and ultimately achieved change. The “art” of wise compromise, symbolized by Nobel Prize winners Lech Wałęsa and Nelson Mandela were “worth promoting”, yet that approach was not sufficiently promoted in the context of peaceful conflict resolution.

Another preventative method, he continued, developed in Europe after World War II by the European coal and steel community, was regional integration, in which a “no war” principle was imbedded. “What was needed was to make war impossible,” he said. With the expansion of the coal and steel community into most countries in the continent, threats to Europe’s security had been consigned to the past. Even if this method could not be duplicated 100 per cent, it merited consideration in other regions of the world.

He then turned to the principle of the responsibility to protect, stating that, in light of the past decade humanitarian tragedies, the international community could not afford a situation where that principle became “a dead letter”. He called for the United Nations to initiate work on defining a catalogue of instruments which could be applied in situations requiring engagement of the principle and which would allow the international community to be effective without exceeding the mission’s mandate or inciting disputes. The international community, when faced with “flagrant violations” of human rights, such as the events occurring in Syria, needed to act in line with the mandate given to it.

His country had over the past 20 years journeyed from a totalitarian regime, the collapse of its economy and mass social unrest to a democratic stability, great economic growth and the ability to support peaceful transformations beyond its borders. Further, the European Union Programme of Eastern Partnership, initiated by Poland and Sweden, worked to integrate the two parts of Europe that had once been divided in the cold war. Poland also offered support to developing countries throughout the world that were embarking “on a road of democratic transformation”.

“The world cannot be driven by a bi- or multi-polar concert of powers,” he stressed. The stability and regulation of international legal order required a more extensive engagement of multilateral institutions, as well as norms and mechanisms that ensured adherence. Only the United Nations system could ensure such adherence. However, in order to improve its effectiveness, the Organization needed to reform, with commitments, once adopted in good faith, honoured. Poland, “so sorely tried in the dramas of the twentieth century”, was, he said in conclusion, committed to the work of the Organization and towards full implementation of its work so that it might “meet the expectations that we have in store for it”